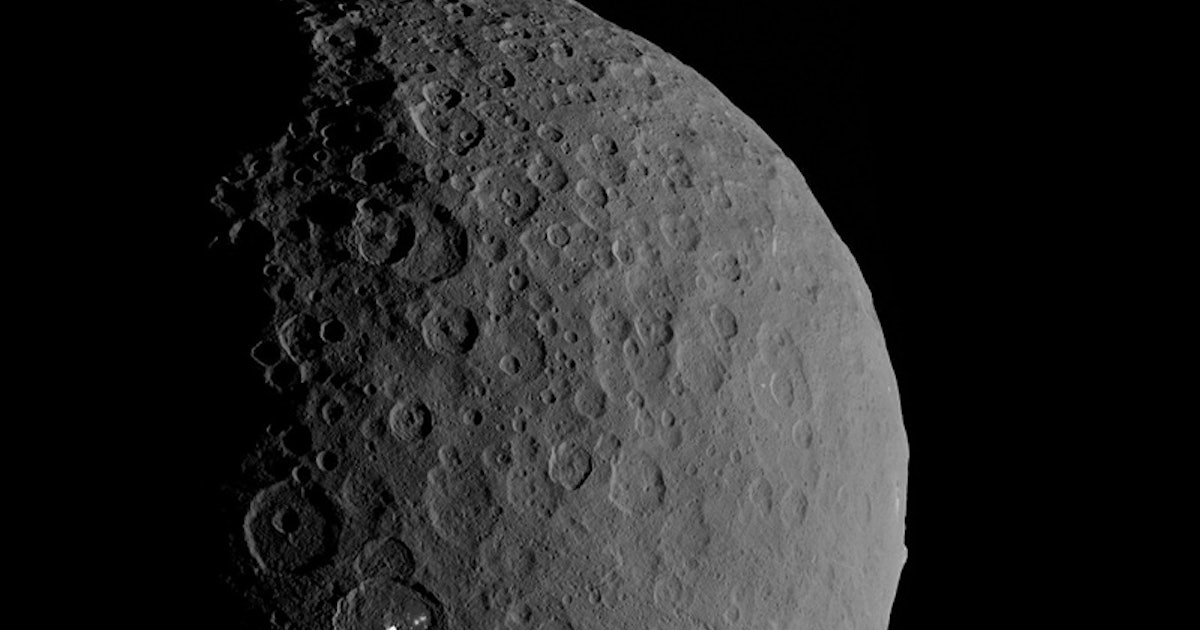 In 1801, astronomers discovered the first body in the asteroid belt, a region of the solar system between the orbits of Jupiter and Mars. Called Ceres, it was understandably originally classified as an asteroid. Today, over 200 years later, its status is actually that of a dwarf planet – it is much larger than its fellow asteroids.

Ceres’ unique status also explains why she was the first dwarf planet to be visited by a spacecraft with NASA’s Dawn mission, which arrived in the Strange World in 2015.

Now, five years later, the mission returned high-resolution images of Ceres that reveal exciting new details that suggest it was volcanically active a million years ago – and could be active today.

The new findings were detailed in seven different studies published in the journals on Monday. Communications of nature, geosciences of nature, and Nature astronomy.

The Dawn spacecraft gave astronomers an unprecedented glimpse of a massive impact site on Ceres, Occator Crater. The crater stretches for 50 miles; scientists believe it formed around 22 million years ago.

Dawn flew over the crater at a distance of less than 35 km above the surface. Previous observations of the area had suggested that some sort of geological activity at the crater site had brought salt water to the surface.

The latest observations have shown that the liquid came from a deep reservoir of brine, or water enriched with salt, and that the brine reservoir is about 25 miles deep and hundreds of miles wide – a world ocean salty which, perhaps, could still escape. on the surface.

“Dawn accomplished much more than we hoped for when she embarked on her extraordinary alien expedition,” said Marc Rayman, Dawn’s mission director at NASA’s Jet Propulsion Laboratory. “These exciting new discoveries at the end of his long and productive mission are a wonderful tribute to this remarkable interplanetary explorer.”

Geologically active – The observed underground brine is believed to be the result of cryovolcanic eruptions. This activity is linked to a type of volcano that erupts volatile substances such as water, ammonia or methane, instead of molten rock, and is considered a phenomenon of the outer solar system.

“Evidence of very recent geological activity on Ceres contradicts the general belief that small bodies in the solar system are not geologically active,” said Guneshwar Thangjam, a researcher at India’s National Institute of Scientific Education and Research. and lead author of one of the new articles. “This opened a new direction in the exploration of planetary science towards understanding the conditions of the very beginning of the solar system, as well as the implications for habitability.”

Dawn also helped identify a certain type of salt that was previously only found on Earth, and now on Ceres. The discovery suggests that the process by which salt deposited on the surface is still active until today, which may explain why the dwarf planet is relatively hot because it maintains small pockets of liquid water.

A frozen body rich in water – Ceres takes 1,682 Earth days, or 4.6 Earth years, to circle the sun. In addition, the dwarf planet takes nine hours to complete a complete rotation around its axis.

Despite being the largest body in the asteroid belt, Ceres’s radius is only 296 miles in diameter. The dwarf planet may represent 25% of the total mass of the asteroid belt, but its tiny planetary counterpart Pluto is still 14 times as massive.

Scientists have found evidence of water on Ceres, and are therefore suspected that the dwarf planet could withstand some form of life.

In 2007, NASA sent the Dawn spacecraft to Ceres to study its composition, surface area, and evolution over time. The spacecraft arrived in Ceres in 2015 and retired in November 2018. After completing her observations of the dwarf planet, Dawn entered an uncontrolled orbit around Ceres and continues to fly around it until today. ‘hui.