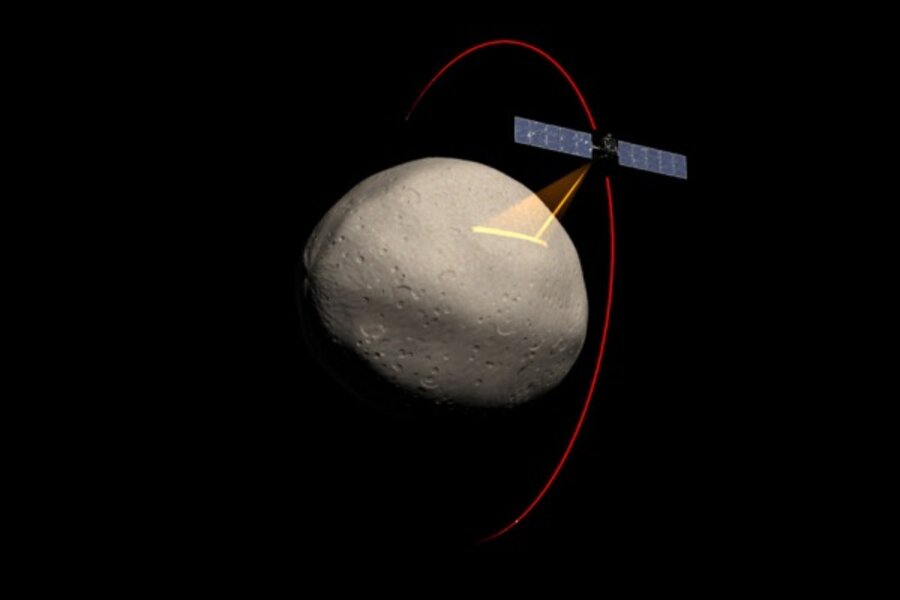 After four years and 1.7 billion miles – including two oscillations around the sun – NASA’s Dawn spacecraft is on final approach to Vesta, an object believed to provide an unprecedented glimpse into the early years of the solar system.

Dawn, with her futuristic ion-drive engine, is just over 100,000 miles from her target – closing in at the majestic rate of around 260 miles per hour, compared to Vesta’s orbital speed.

The spacecraft must take its orbit on July 16 and spend a year in Vesta. Then it’s heading for a year-long visit to Ceres, slated to begin in 2015, Dawn’s project manager Robert Mase said during a final approach briefing on Thursday.

Both objects call the main home of the asteroid belt. The belt encircles the sun between the orbits of Mars and Jupiter.

Dawn is NASA’s first mission designed to visit and orbit two objects with the same spacecraft.

As planetary scientists hammered out their to-do list for a visit to Vesta, it became clear that “this little world has tremendous significance,” says Carol Raymond, the mission’s deputy principal scientist and researcher at the Jet Propulsion Laboratory in NASA in Pasadena, California. “Vesta is a window into the early origins of our solar system and the terrestrial planets.”

In some ways, the idea of ​​viewing asteroids and their tailed cousins, comets, as “windows into the early solar system” has become something of a cliché – an early hope that came true in some cases, but not others, as researchers have learned that some of these objects have been heavily altered by their billions of years orbiting the sun.

But the researchers say they have good reason to believe that Vesta and its big brother, Ceres, will live up to their bills. Both represent objects that could have become planets in their own right, if Jupiter’s rapid growth and rapidly changing gravitational field had not been interfered with.

Each represents an intriguing snapshot of planet formation taken at different stages of growth, holding clues to the processes that built planets – and prevented the formation of others – during the first 10 million years of 4.6 billion years of solar system history.

Vesta was discovered in 1807. Although not uniform in shape, the object averages about 329 miles in diameter. It is the second most massive object in the main asteroid belt, after Ceres.

Ground-based and Hubble Space Telescope observations have discovered what appears to be a large crater about 290 miles in diameter near Vesta’s south pole. The rim rises 2.5 to 7.5 miles above the surrounding landscape, while the ground sits about 8 miles below the rest of the landscape and hosts a central peak that leaps 11 miles above the bottom of the crater.

The impact is thought to have spawned a family of asteroids known as Type V asteroids, as well as countless meteoroids, many of which landed on Earth.

Indeed, one in 20 meteorites scientists find comes from Vesta, says Christopher Russell, a planetary scientist at the University of California, Los Angeles and leader of the international team of researchers behind the mission.

Analyzes of these meteorites have led researchers to conclude that Vesta formed around the same time as Jupiter. Jupiter is widely believed to be the first planet to develop from the disk of dust and gas that surrounded the early sun.

The composition of these Vesta meteorites also suggests that by the time its development was halted, Vesta had already begun to feel enough heat from its interior – and from the impacts of other objects – to begin the process of separating dense materials from lighter materials. Like iron in the Earth’s core, the heaviest and densest materials gravitated toward the center of Vesta, while the lighter ones rose toward the surface.

This geophysical separation of materials within Vesta has prompted many scientists to promote it from an asteroid to a protoplanet.

What halted Vesta’s development before it could transition from protoplanet to planet? One of the prime suspects is Jupiter, whose relatively rapid growth and gravitational influence on the vicinity has sparked a bumper car-like free-for-all in the asteroid belt.

“He would have become a planet if he had been allowed to continue,” says Dr Russell.

These are among the processes scientists hope to confirm once Dawn arrives next month.

Dawn’s next destination: Ceres, Queen of the Asteroid Belt

Ceres, on the other hand, is now considered a dwarf planet, a step up from a protoplanet.

Ceres is about 600 miles in diameter and about one-third the mass of all objects in the main asteroid belt. And unlike Vesta, Ceres is spherical.

Ceres, too, seems to have undergone a partitioning of its interior by the density of the materials it contains. Like most moons orbiting gas giants, Ceres would have a rocky core covered in an icy mantle – and, like Saturn’s moon Enceladus, could harbor a mini sea under the ice.

With Vesta and Ceres nothing more than fuzzy spots of our best telescopes, it’s no wonder planetary scientists are eager to visit these objects via orbiting spacecraft. What they think they know now about these two objects is built on models and blurred images.

Dawn offers scientists “an unprecedented opportunity to spend a year in a body we really know nothing about,” says Dr Raymond.

The Greatest Mysteries of the Asteroid Belt