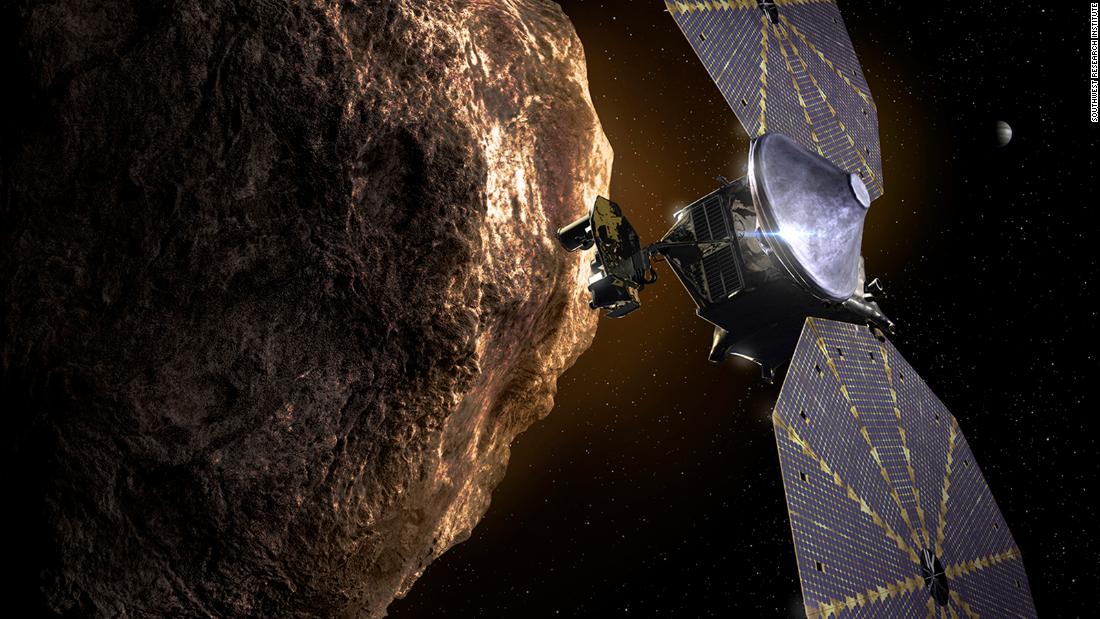 The Lucy mission has passed all of its pre-launch tests and is expected to leave the Cape Canaveral Space Force Station around 5:30 a.m.ET on October 16.

The Trojan asteroids, which borrow their name from Greek mythology, orbit the sun in two swarms – one ahead of Jupiter, the largest planet in our solar system, and the other behind.

Lucy is the first spacecraft designed to visit and observe these asteroids, remnants of the early days of our solar system. The mission will help researchers travel back in time to find out how the solar system was formed 4.5 billion years ago.

Lucy’s 12-year mission could also help scientists understand how our planets ended up in their current locations.

There are around 7,000 Trojan asteroids, and the largest is 250 kilometers in diameter. Asteroids represent the remaining material that still lingers after the formation of the giant planets in our solar system, including Jupiter, Saturn, Uranus, and Neptune. Even though they share an orbit with Jupiter, asteroids are still very far from the planet itself, almost as far as Jupiter is from the sun, according to NASA.

â€œWith Lucy, we’re going to hit eight never-before-seen asteroids in 12 years with a single spacecraft,â€ Tom Statler, Project Lucy scientist at NASA Headquarters, said in a statement. “This is a fantastic opportunity for discovery as we probe the distant past of our solar system.”

The spacecraft is expected to fly over an asteroid in the main asteroid belt between Mars and Jupiter, and then it will explore seven of the Trojans. During her mission, Lucy will eventually return to Earth’s orbit three times for gravitational aids that can get her on the right track. This will make Lucy the first spacecraft to travel to Jupiter and return to Earth.

â€œLaunching a spaceship is almost like sending a kid to college – you’ve done what you can to get them ready for that next big step on their own,â€ said Hal Levison, the researcher. Mission principal Lucy, based at the Southwest Research Institute in Boulder, Colo., in a statement.

The mission takes its name from the Lucy fossil, the remains of an ancient human ancestor discovered in Ethiopia in 1974. The skeleton has helped researchers piece together aspects of human evolution, and members of the NASA team Lucy hope their mission will achieve a similar feat regarding the history of our solar system.

â€œWe view these objects as the fossils of the planet’s formation,â€ Levison said.

The fossil and the mission are both nods to the Beatles tune, â€œLucy in the Sky with Diamonds,â€ which is why the Lucy mission logo includes a diamond.

The Lucy spacecraft is over 14 meters end-to-end, largely because of its giant solar panels – each the width of a school bus – designed to maintain power to the spacecraft’s instruments. spatial. But Lucy also has fuel to help her perform skillful maneuvers on the path of the asteroids.

Lucy will specifically visit these asteroids, all named for heroes you might recognize in Homer’s “The Illiad”: Eurybates, Queta, Polymele, Leucus, Orus, Patroclus, and Menoetius.

Although not one of the Trojans, Eurybates was chosen because it is the largest remnant of an ancient massive collision, meaning it could reveal a glimpse of what is there. inside an asteroid. Observations made using the Hubble Space Telescope have revealed that the small asteroid named Queta is a Eurybates satellite.

Each of the asteroids that Lucy will hover over differs in size and color.

â€œSurprisingly, many of these mysterious worlds have been changed very little in the 4.6 billion years since their formation,â€ said Lori Glaze, director of NASA’s planetary science division at headquarters. from NASA.“The relatively pristine state makes comets, asteroids and some meteorites wonderful storytellers who have preserved clues they can share with us about conditions in the early solar system. “

Lucy will use three scientific instruments to study asteroids, including color and black-and-white cameras, a thermometer, and an infrared imaging spectrometer to determine the composition of asteroid surface materials. The spacecraft will communicate with Earth using its antenna, which can also be used to help determine the masses of asteroids.

Once the Lucy mission is completed, the spacecraft will remain in a stable orbit that traces its path of exploration between Earth and Jupiter, and it will have no chance of colliding with either for more. 100,000 years old. Eventually, if the orbit becomes unstable, it will likely either head towards a doomed mission to the sun or be kicked out of our solar system.