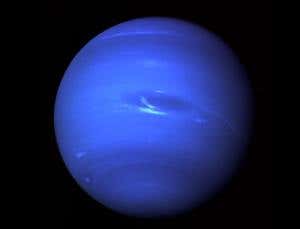 An asteroid trapped in a “dead zone” behind Neptune has been discovered for the first time. The discovery suggests that the blue planet’s collection of rocks may outnumber objects in the main asteroid belt and could provide clues to the origin of comets.

Objects can be trapped in two gravitational dead zones around Neptune, where the forces of the sun and planet balance each other. Over the past decade, astronomers have identified six asteroids – known as Trojans – in the zone that moves past the planet along its orbit. But finding Trojans in the region following the planet has proven more difficult, as faint light reflected from objects there is swept away by brighter starlight from the plane of the Milky Way.

Now, thanks to strategically located dust clouds, Scott Shepard at the Carnegie Institution in Washington and Chadwick Trujillo at the Gemini Observatory in Hawaii spotted the first such Trojan.

To find the asteroid – dubbed 2008 LC18 – Sheppard and Trujillo used existing images of the sky to identify dark clouds of dust and gas in our galaxy that fall along the path of the back Lagrangian point. These clouds obscured the background starlight. They used the Subaru Telescope on Mauna Kea, Hawaii to spot the Trojan Horse as it moved across the sky.

The team estimates that 2008 LC18 is about 100 kilometers wide. Based on the size of the region they studied, they suspect that Neptune harbors up to 150 other Trojans of this size in the back Lagrangian region. With the numbers projected into the planet’s main Lagrangian zone, they suspect that Neptune likely contains more asteroids of this size than the solar system’s main asteroid belt between Mars and Jupiter.

The Neptune Trojans were likely captured billions of years ago, when bodies in the solar system shifted position in a time of planetary upheaval, Sheppard says. Neptune, which may have been thrown outward through twice its original orbit during the migration, could have picked up the rocky bodies as it moved.

Trojan horses could provide information on the origin of comets. If Neptune has smaller Trojans, they could be a source of short-period comets, which pass through the inner solar system every few hundred years. Dislodged Trojans may explain comets, the origin of which is uncertain, but more will have to be found before their numbers can really support this scenario.

Automated surveys that frequently take snapshots of the sky, like the upcoming Pan-STARRS project in Hawaii, will be particularly well suited to searching for asteroids in Neptune’s orbit.

“The goal of these projects is to make a movie of the whole sky, so they get everything that moves,” says Eugene Chiang from the University of California at Berkeley, which discovered the first Trojan Neptune. “It’s crucial for finding things like Trojans.”