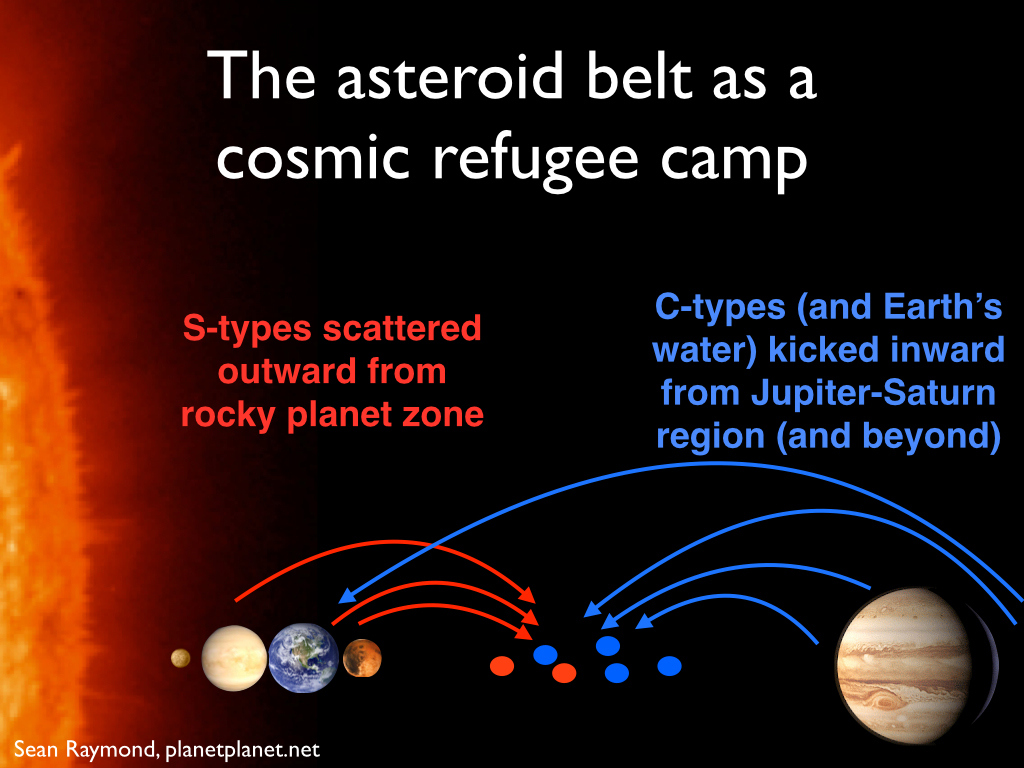 New theory on the origin of the asteroid belt

(Phys.org) —A duo of researchers from the University of Bordeaux have proposed a new theory to explain the origin of the asteroid belt. In their article published in Scientists progress, Sean Raymond and Andre Izidoro describe their theory and what they found while trying to model it.

The asteroid belt (sometimes referred to as the main asteroid belt) orbits between Mars and Jupiter. It is made up of asteroids and minor planets forming a disc around the sun. It also serves as the dividing line between the inner rocky planets and the outer gas giants. Current theory suggests that the asteroid belt was once much more populated, but Jupiter’s gravitational pull projected around 99% of its old material to other parts of the solar system or beyond. Astronomers also speculated that Jupiter’s gravity was preventing the belt material from merging into larger planets. In this new effort, the researchers come up with a completely different explanation for the origin of the asteroid belt, suggesting that the belt started out as empty space and was then filled with material thrown from the inner and outer planets.

The researchers note that asteroids closer to rocky planets (called S-type asteroids) tend to contain silicate, similar to inner planets. In contrast, belt asteroids closer to gas giants (called C-type asteroids) tend to contain more carbon, which makes them more similar to gas giants. This, the researchers note, suggests that asteroids actually originated from the planets at the time of their formation – the excess material was essentially thrown back into the asteroid belt, where it is located today.

To test their theory, the researchers created a model that mimics the early solar system, in which the asteroid belt is initially empty. Running the model forward, they report, showed that it was possible that material from other planets could have made it to the belt, resulting in the disc seen today. They plan to continue their research to see if they can find more evidence for their theory or for the conventional view.

Abstract
The asteroid belt contains less than a thousandth of the Earth’s mass and is radially separated, with S-types dominating the inner belt and C-types the outer belt. It is generally assumed that the belt formed with much more mass and then became sharply depleted. We show that the current asteroid belt is consistent with an empty formation, without any planetesimals between the current orbits of Mars and Jupiter. This is consistent with models in which drifting dust is concentrated in an isolated ring of terrestrial planetesimals. Gravitational scattering during the formation of terrestrial planets causes radial propagation, carrying planetesimals from within 1 to 1.5 astronomical units to the belt. Many times the total mass of current in S types is implanted, with a preference for the inner main belt. C-types are implanted from the outside, as the accretion of gas from giant planets destabilizes nearby planetesimals and injects a fraction into the asteroid belt, preferably the outer main belt. These implantation mechanisms are simple by-products of the formation of terrestrial and giant planets. The asteroid belt may therefore represent a repository for planetary remnants that have accumulated throughout the solar system but not in the belt itself.

The asteroid belt could actually be a giant cosmic refugee camp