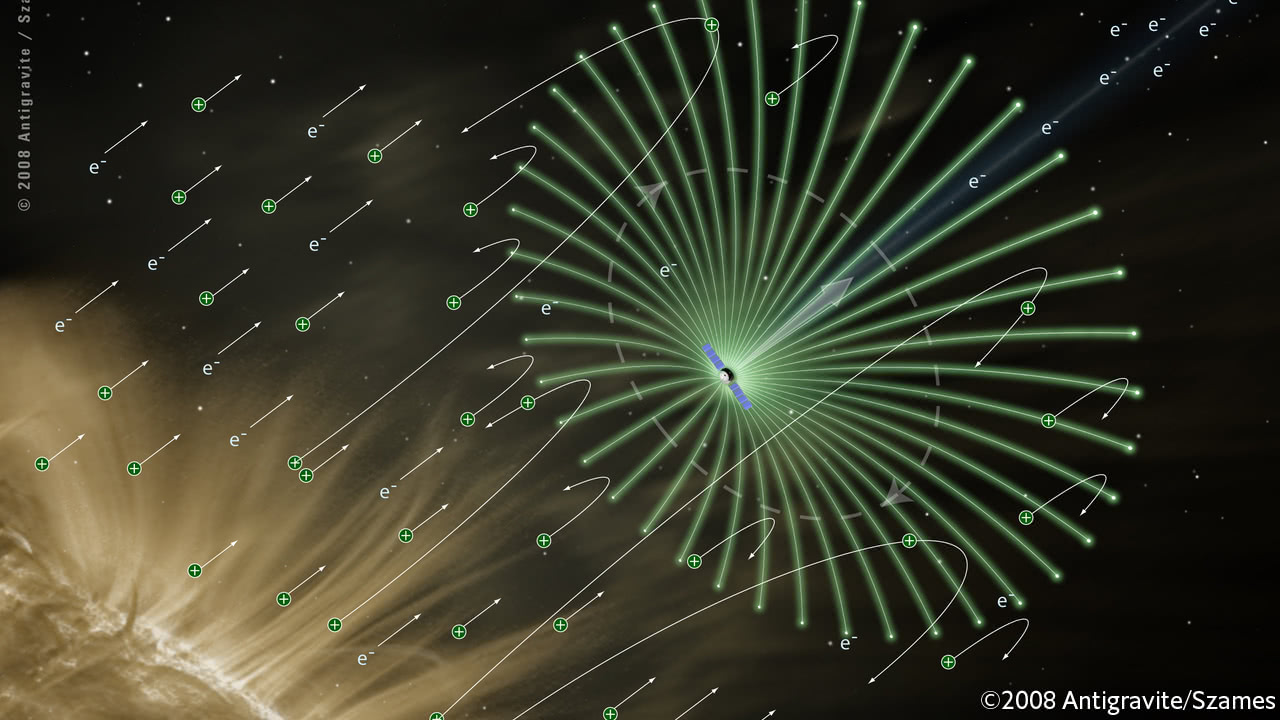 Travel to SPACE is expensive. Missions such as Cassini, a recently completed exploration of Saturn and its moons, and New Horizons, a trip to Pluto and one or two more distant objects in the far reaches of the solar system, involved the launching of devices weighing hundreds or thousands of kilograms. For large, essentially single targets like these, this expense has proven to be worthwhile. But as exploration continues towards smaller and more numerous objects, like asteroids, individual visits at costs of hundreds of millions or even billions of dollars are no longer a feasible idea. A mass robotic space travel system must be designed. And Pekka Janhunen of the Finnish Meteorological Institute in Helsinki thinks he invented one.

In 2004, Dr. Janhunen put forward the idea of ​​a sail that harnesses the solar wind, a stream of charged particles emanating from the sun that manifests on Earth in dramatic aurora shows. He and his colleagues have since refined the idea. In an article they presented at the European Congress of Planetary Sciences in Riga, Latvia, on September 19, they proposed that spacecraft equipped with their new propulsion system could fly back and forth to the Belt. asteroids in just over three years. A fleet of 50 such devices, weighing around 5 kg each and therefore capable of being launched by a single rocket, could visit 300 asteroids, study them and return to Earth for a modest fee of 60 million euros (72 million dollars ), including the cost of launching. .

The solar electric sail (E-sail), as Dr. Janhunen calls his invention, consists of four wires, each 20 km long but only 25 microns (millionths of a meter) thick. These are braided together in a tie. For launching, this lanyard is wrapped tightly around a small motorized spool inside the craft. Once in space, the threads are unwound by the motor, assisted by the centripetal force of the spinning machine. Once fully deployed, the lanyard thus sweeps a circle with a diameter of 40 km.

The propulsion of the craft comes from the interaction between this attachment and the hydrogen and helium nuclei which form the major part of the mass of the solar wind. These nuclei are positively charged. And the same goes for the tether, because the craft also carries a solar-powered electron gun that projects a stream of electrons collected from the wires into space. Since electrons are negatively charged, ejecting them in this way maintains positive attachment. As the charges repel each other, the positive tether sends the positive hydrogen and helium nuclei back to where they came from. And as with every action there is an equal and opposite reaction (Newton’s third law of motion), this reflection makes the spaceship move forward.

If the tether was stationary with respect to the machine, the result would be an unbalanced force. But because it spins, this force equalizes after an entire circuit, propelling the craft forward. However, varying the output of the electron gun can deliberately create an unbalanced force, allowing the craft to be steered. And, although the acceleration produced is low (1 mm per second per second), there is little in the vacuum of space to slow the machine down. It can therefore reach a speed of tens of kilometers per second after a year of travel, making possible its rapid escapade towards the asteroid belt.

In addition to the E-sail, the craft Dr Janhunen envisioned would have a small telescope on board, as well as an infrared spectrometer. These would analyze the surface of each asteroid encountered. Each probe would be able to fly within about 1,000 km of six or seven asteroids, taking photos and collecting data. The probes would not have the power to broadcast this data to Earth from the asteroid belt. But they would, on the contrary, be able to store them in flash memory chips, to relay them to Earth on their return home.

In some ways, an electronic sail resembles a solar sail, a rival idea for propelling boats inexpensively into space. A solar sail provides propulsion because the sunlight it reflects exerts pressure on the sail, pushing it forward. But electronic sails have an important advantage over solar sails. Once deployed, there is no easy way to stop a craft with a solar sail picking up speed. An electronic sailing craft can be prevented from accelerating simply by turning off its electron gun. This means that it can come back to Earth under the influence of the sun’s gravity.

Electronic sails, however, have not been tested. A solar sail a. Ikaros, a craft launched in 2010 by JAXA, the Japanese space agency, successfully deployed such a sail with an area of ​​196 square meters. Dr Janhunen hopes to start proving his technology by unrolling a 100-meter-long lanyard into space later this year.

For those with a romantic temperament, electronic sails can be seen as the technology that will unlock the asteroid belt for commercial exploitation. There is reason to believe that some asteroids are rich in precious metals, such as platinum and iridium. Boats equipped with many fasteners could carry heavy payloads – perhaps up to a ton – that would deploy mining equipment and bring metal cargoes back to Earth.

Maybe someday. But, in the meantime, electronic veils appear to be a plausible way to extend humanity’s understanding of the nearby cosmic neighborhood.

New concept for the formation of terrestrial planets – sciencedaily

60 days in bed for science; Mystery of the asteroid belt solved and ice on Mercury? – The world of science