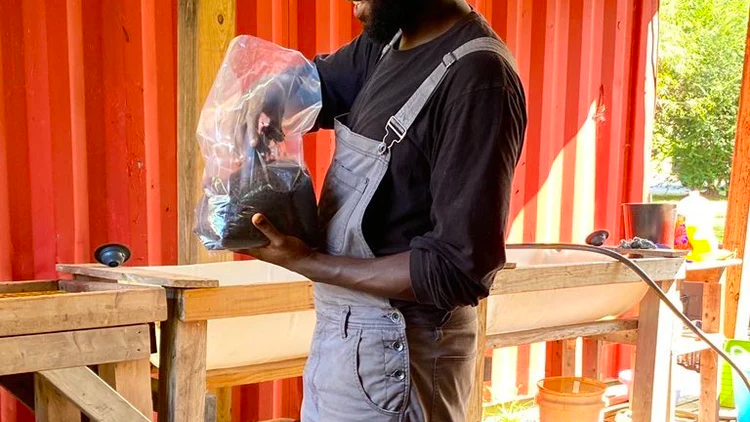 Peat moss isn’t good for the planet, but there’s a more sustainable option

Jules Giuliano knows it’s ironic that gardening – something inherently good for the planet – often uses materials that actually harm the environment. So he set out to change that: in April 2022, Giuliano launched Rosy Soil, a carbon-negative indoor potting soil. Along with a team of scientists, Giuliano worked as a lead researcher to create soil with all-natural, sustainable ingredients that provide nutrients and promote drainage, while fighting greenhouse gases.

Composed of negative carbon biochar, vegan compost and root-stimulating mycorrhizae, Rosy Soil is not dependent on peat moss, the primary ingredient in commercial potting soils. Although peatlands make up less than 3% of Earth’s landmass, they sequester more carbon than any other terrestrial ecosystem. When these lands are harvested for peat moss, this carbon dioxide is released into the atmosphere.

“Essentially, we are using one of our most vital natural resources to absorb carbon as breeding ground,” Giuliano explains. “I don’t think it’s about saying ‘Oh, you didn’t know that’ because I didn’t know that until recently. [At Rosy Soil] we’re trying to hopefully educate people and push the business side to, ‘Hey, let’s stop using peat moss and start using biochar instead.'”

Giuliano didn’t go to college for anything agriculture-related (his degree is in sociology), but about five years ago he changed careers. Since then, he has expanded his knowledge of soils through various agricultural experiences: harvesting crops in a K-12 school garden in Chicago, winning second place in a Cannabis Cup contest for the best indica, working on a research farm in Rodale Institute in Georgia. , running an organic urban farm in Atlanta. Today at Rosy Soil, Giuliano has spent the past six months analyzing, formulating and blending new soils to create the best blend. In a greenhouse an hour south of Atlanta, he spends days testing and testing plants, reading existing research, and testing peat moss-based soils against biochar-based ones. , the flagship ingredient of Rosy Soil.

Created by heating organic agricultural waste (like rotting corn stock or wood), biochar acts as a healthy soil amendment that also stores carbon. According to the Rosy Soil website, for every ton of biochar produced, three tons of carbon dioxide are removed from the carbon cycle. “By switching to biochar, we are supporting an industry that has the potential to sequester 2.2 to 4.4 gigatonnes of CO2 per year by 2050,” reads a report by Rosy Soil to assess lifecycle emissions. indoor potting soil.

Rosy Soil’s vegan compost and mycorrhizae (a fungus that has a natural relationship with over 90% of land plants) also help add nutrients plants love without producing waste or requiring the addition of chemicals . Compost also uses only “green or brown waste”, which suits gardeners who prefer to stay away from animal products.

“Compost is great,” says Giuliano. “It adds more microbiology, adding trace minerals, minerals that we eat, and also composting some soil structures. So it’s going to help with our drainage or our porosity – many other issues that we have with our floor.”

Because biochar holds water so well, Giuliano recommends users water less often (especially since people usually tend to overwater already). Otherwise, the maintenance process is no different than using a commercial mix, but by using a biochar mix instead of peat moss, you dramatically increase the eco-friendliness of your gardening.

Choosing ecological products is not the only way to garden sustainably. Giuliano practices green farming through urban composting: collecting food scraps in worm bins for a month or two before returning them to his garden or houseplants. You can also mulch, plant native and perennial plants, save seeds, reuse your soil, and take other small steps to reduce your garden’s footprint.

Technology must take care of the planet: Victorialand