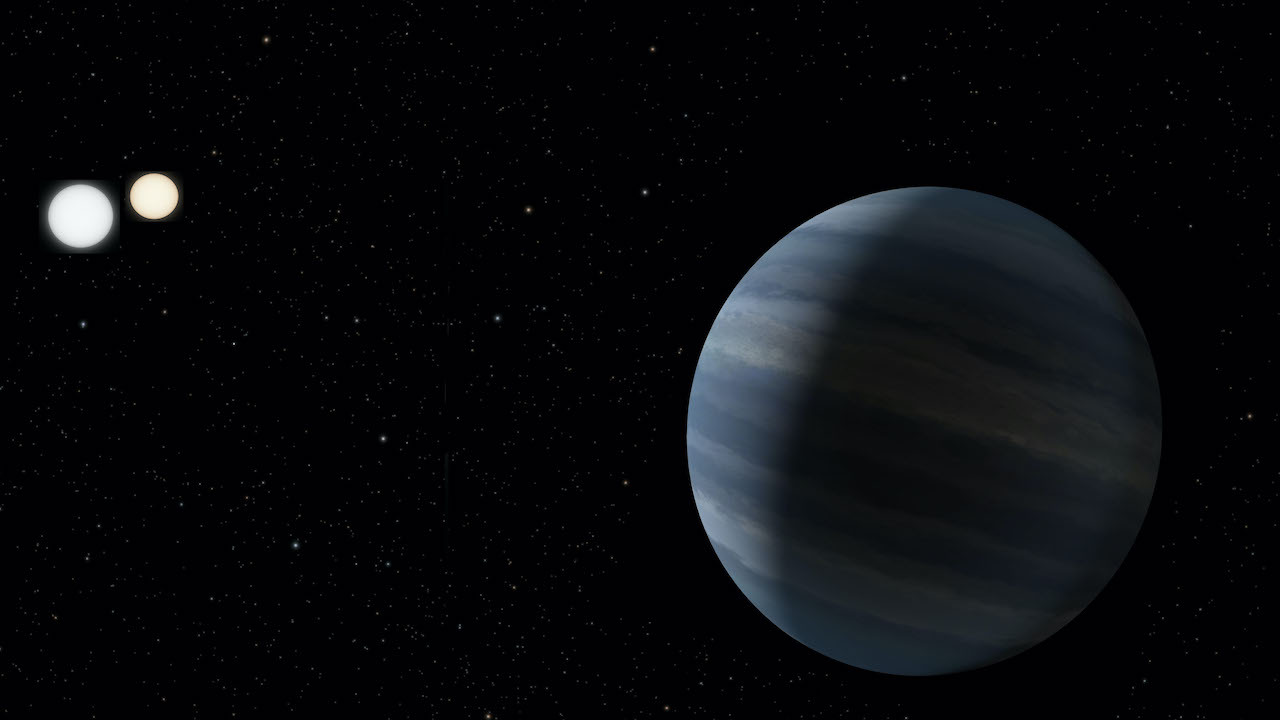 Discovery: A newly discovered planet about as large as Jupiter belongs to a mind-boggling system. The planet orbits two stars and, when viewed from Earth, intersects the faces of both. This means that this system made quite a spectacle for astronomers: they observed that the two stars make a total of three eclipses, while the planet made its way through a star and then, a few days later, through the ‘other.

Highlights: Planetary transits – when a planet crosses the face of its star – is a major route to the discovery of exoplanets, or planets around other stars. Space telescopes like NASA’s TESS, the Transiting Exoplanet Survey Satellite, scan thousands of stars at a time, looking for the small hollow in starlight when an orbiting planet crosses the face of its mother star . TESS has discovered more than 150 confirmed exoplanets since its launch in 2018, including the new giant, and nearly 3,500 candidate exoplanets awaiting further confirmation.

Details: Worlds that orbit two stars are known as “circumbinary” planets because they orbit “binary” stars, or stars orbiting one another. Finding transit circumbinary is quite rare; TESS’s predecessor, the now retired Kepler Space Telescope, has discovered thousands of exoplanets, but only a dozen circumbinary planets. The new planet, TIC 172900988 b, is a gas giant the size of our own Jupiter, although much more massive. It orbits two Sun-like stars which, in turn, revolve around each other.

But even among circumbinarians, this finding stands out. His year, once around the two stars, lasts about 200 days. This would normally present a great challenge to astronomers trying to understand the dynamics of this system; for example, they would have to wait 200 days to see another transit and confirm the orbital period of the planet. But TESS makes its observations sector by sector; in this case, scientists only had 30 days of observations of the circumbinary planetary system before TESS moved to another patch of sky.

Thanks to the configuration of these stars and their planets, and the advantages of our viewing angle from Earth, astronomers had most of the information they needed. All three eclipses could be observed within the 20-day orbit of the stars around each other; and scientists have only seen a five-day gap between the transit of the first star through the planet and the second.

It was the first time that a scientific team was able to calculate such complex orbital motions from such a limited amount of data.

And high-resolution imaging in the near infrared portion of the light spectrum has revealed what could be a third star in this system. The star is said to have a very long orbit – around 5,000 years – encircling both the stars and the newly discovered planet. This ultra-cold star has a low mass (or weight), less than 10 percent of the other two stars, and only 30 times as massive as the giant planet.

Fun facts: On the same day, the new dynamic system was implemented NASA Exoplanets Archives, on September 10, he had an extraordinary company: a strange new world called TOI-1518 b. This planet is an “ultra-hot Jupiter”, quite strange in itself, because such worlds make extremely narrow orbits around their stars. A year on this planet takes only 1.9 days. Now add an extremely strange shape to this orbit. The orbit is sharply tilted relative to the star’s axis of rotation, and it gets stranger: the planet is also orbiting in the opposite direction to the star’s rotation. TESS continues, it seems, to capture evidence of not only bizarre planets, but also bizarre planetary systems.

The discoverers: An international scientific team led by Veselin B. Kostov, from NASA’s Goddard Space Flight Center, discovered the circumbinary planet in transit, TIC 172900988 b. The ultra-hot Jupiter with wild orbit, TOI-1518b, has been confirmed using TESS data by another international team, this one led by Samuel HC Cabot of Yale University.