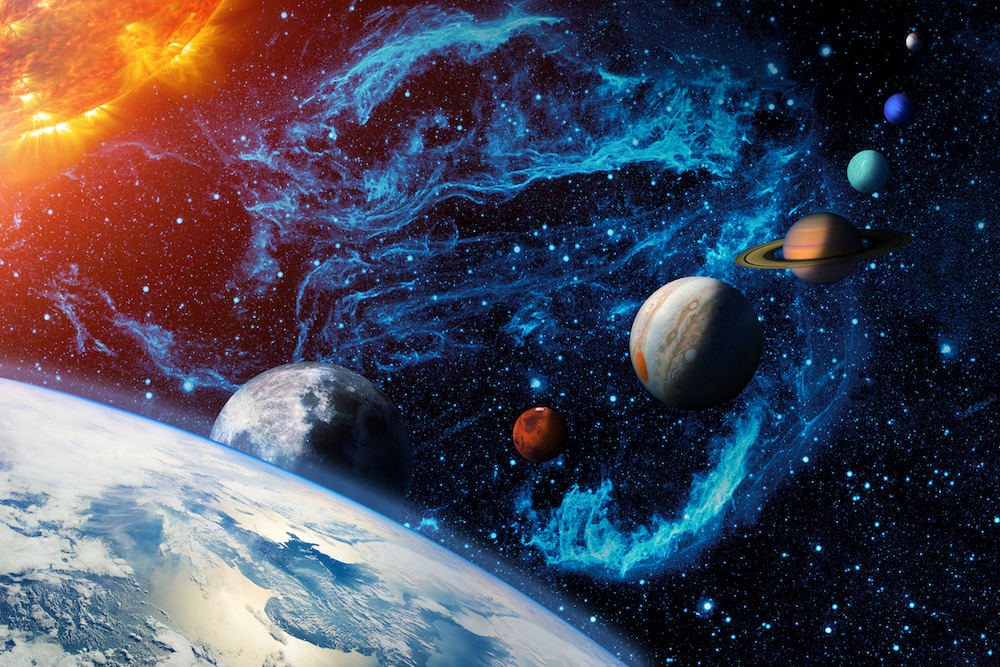 Billions of years ago, when it first emerged from the clouds of gas and dust, the solar system was supposed to be in order. Then gravitational forces turned everything upside down.

What happened at the start of the solar system wasn’t exactly like the thermonuclear explosion that knocked the Moon out of its orbit in space: 1999. Even though no nuclear waste was lying around like in the movie, the phenomena that occurred at the time still had enough power to get rid of huge planets. The gas giants – Jupiter, Saturn, Neptune, Uranus and possibly another unknown body that could have been the elusive Planet 9 – floated around the nascent Sun in circular orbits and even…until they be disturbed.

How did these huge planets end up where they are now? As the dusty, gaseous protoplanetary disk slowly dissipated, the orbits of the gas giants are thought to have changed from being evenly spaced and circular to irregularly spaced and oblong. The Nice model (as in Nice, France) states that this happened due to chaotic instability. University of Michigan researcher Seth Jacobson, co-author of a study recently published in Nature, and his team suspected something else and wanted to find out what was really behind this change.

“Terrestrial planets would have finished forming at the time of the Nice instability, but their orbits don’t seem to register such massive dynamical instability,” Jacobson told SYFY WIRE. “This got us wondering if a different giant instability triggered earlier in the solar system’s history could explain many of the same phenomena as the original Nice model.”

Something else that looks almost out of Space: 1999 caused Jacboson to rethink this model. The Moon was thought to have suffered rapid impacts from asteroids and other objects in what was called a terminal cataclysm. But he thinks those strikes, which eventually formed huge pools, probably didn’t all happen at once. It was more likely a series of impacts that occurred over a long period of time as chunks of rock left over from the planetary formation hit the lunar surface. Maybe those planetesimals were jealous.

Instead of the kind of lunar instability and bombardment suggested by the Nice model, it’s possible that a “bounce” effect reorbited the gas giants. Such planets tend to crawl towards their star during its early stages of development. When the protostar reaches puberty, it has already accumulated most of the primordial gas around it, and the gas in the disc becomes less dense. It also heats up and creates a photoevaporation front. This is where the disk is eaten from the inside out, the gas closest to the star being ionized (molecules gain or lose electrons) by its intense radiation.

“The gravitational interactions between each planet and the disk change because there is no longer as much gas inside the planet as there was before photoevaporation,” Jacobson said. “This causes a change in the direction of the planet’s migration, what we call the rebound effect.”

So when the gas giants were too close to the photoevaporation front, that explains why they started to retreat. The only exception is Jupiter because it has already vented enough gas into the disk to grow to the immense size it is now. However, when the others retreated from the Sun, they destabilized the solar system. Their orbital resonances caused by their movement towards the Sun have been disturbed. An orbital resonance is the gravitational influence of bodies orbiting in space on each other because their orbital periods are in a ratio of two whole numbers (such as 3:5). After the resonances of the gas giants were shattered, everything they passed reacted to them.

The chaos finally subsided, so the new orbits of the gas giants stabilized, but their eccentric orbits bear witness to this ancient disturbance. Jacobson and his team created simulations of these interactions in which gravitational forces constantly change the positions and speeds of the Sun and planets. But what does all this have to do with Planet 9? Researcher David Nesvory of the Southwest Research Institute (SwRI) thinks a shift in Jupiter’s axis could have thrown an additional ice giant into the solar system.

“If the solar system was still in its natal stellar birth cluster, then it’s possible that, rather than this hypothetical ice giant becoming a free-floating planet, it could have been deflected by nearby stars into a distant orbit around our Sun, just like the alleged Planet 9,” Jacobson said.

There is a chance that there really is a rejected ice giant lurking 80 billion kilometers from the Sun. So you get an idea of ​​the distance, it’s 47 billion miles further from our star than Neptune. Maybe one day he will come out of hiding.