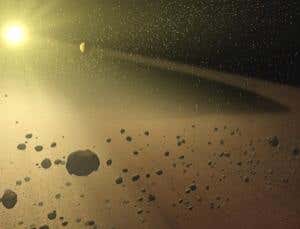 Pluto’s relatives may have invaded the asteroid belt

Millions of objects in the solar system’s main asteroid belt could be icy intruders from beyond Neptune that were thrown into their current orbits after a violent migration of giant planets, according to a new simulation.

The Solar System’s main asteroid belt is a diverse mix of objects that orbit between Mars and Jupiter. These asteroids are generally thought to have formed near their current location, so their compositions should reflect the original distribution of gas and dust that surrounded the sun there and eventually condensed into solid bodies.

“People just assumed that what we see there formed there,” says Hal Levison from the Southwest Research Institute in Boulder, Colorado.

But Levison and others suspect that about 20% of the belt’s asteroids could be comet-like objects born in cooler climates beyond Neptune’s orbit.

The results come from new simulations using a theory called the Nice Model, which suggests that the giant planets in the solar system were born closer to each other and were surrounded by a vast disk of remnants of planet formation called planetesimals ( see Gas giants recognized for the formation of the solar system).

According to the model, Jupiter and Saturn entered a tight orbital dance about 700 million years after the solar system formed. Their gravity then tossed Uranus and Neptune into the planetesimal disc like bowling balls, causing the objects to scatter like pins.

Past simulations have tracked the trajectories of these planetesimals and shown that they eventually form the Kuiper Belt of icy debris where Pluto, some of Jupiter’s and Saturn’s distant satellites, and Trojan asteroids, bodies that share Jupiter’s orbit but are centered at two points. in front and behind the planet.

The new simulation introduced planetesimals to the region surrounding Jupiter and Saturn as the planets moved to see how many would be captured as Hilda asteroids, a cluster outside the main asteroid belt that orbits the sun three times. for every two orbits of Jupiter.

While some of the objects became Hildas and Trojans, most of the captured objects ended up in the outer part of the solar system’s main asteroid belt.

This is because the outer asteroid belt is home to objects thought to contain ice, while the inner asteroid belt is dominated by rocky bodies. “The interpretation has been that this represents a change in the nebula or disk from which the planets formed,” Levison said. new scientist.

But if these icy outer objects are newcomers, that would mean that not all objects in the asteroid belt formed near their current location. “It tells the community that the assumptions you’ve made don’t have to be true,” Levison says.

Corn Renu Malhotra from the University of Arizona in Tucson says she is not convinced of the estimate that 20% of main-belt asteroids may have come from the outer solar system.

That’s because the new study didn’t simulate the process that knocked the planetesimals out of their original orbits — it only sent objects from the outer solar system inward to find out what fraction would be captured.

“It’s not clear how statistically likely that is,” Malhotra says. The simplest hypothesis, she adds, is that most main-belt asteroids are original residents.

The asteroid belt could bear the scars of migrating planets