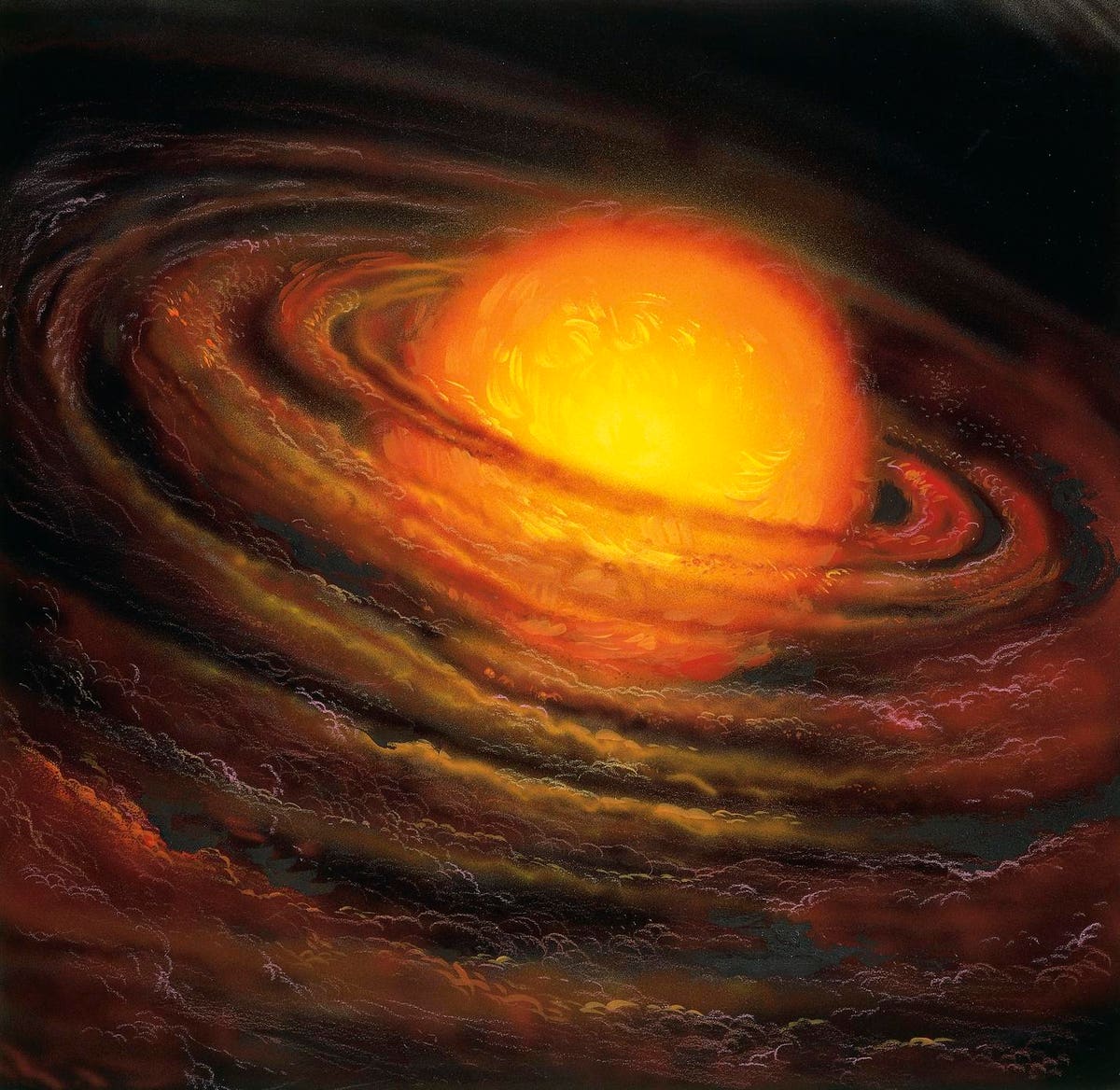 Precise details about the beginnings of our solar system are extraordinarily difficult to obtain. But a research team using new measurements of pristine magnetic fields in two extremely rare meteorites has successfully modeled some of the early evolution of our solar system.

And for the first time, magnetic measurements within these meteorites have enabled the team to constrain the lifespan and spatial evolution of our solar system’s protoplanetary disk. That is, the spinning disk of gas and dust from which the planets of our solar system formed about 4.56 billion years ago.

Our study shows that the Solar Nebula – the cloud of gas and dust from which our solar system formed, dissipated very quickly (in less than 1.5 million years) after lasting 3 million years, Benjamin Weiss, the article’s second author and a planetary science professor at MIT, told me. The mechanism that scattered the solar nebula was heated by the young sun or winds generated by magnetic fields in the disk, he says.

Researchers have long known that there was a large void in our solar nebula around what we now call the Main Asteroid Belt. Initially, this discrepancy was simply thought to have been caused by the formation of our gas giant planet Jupiter. But now researchers have other ideas.

Isotope data from meteorites indicate two reservoirs existing in the early solar system; one of the initial hypotheses was that Jupiter created the gap, Cauê S. Borlina, lead author of the paper and Blaustein Postdoctoral Fellow in Earth and Planetary Sciences at Johns Hopkins University, told me. But he says other work provides evidence that this gap could form through other mechanisms.

“The role of magnetic fields makes sense because we see evidence of it in the potential creation of space and also in the dissipation of the nebula,” Borlina said.

On the inner side of space, gas and dust coalesced into terrestrial planets, including Earth and Mars, MIT notes. But on the other, more icy side of the gap, Jupiter and the outer gas giants formed, according to MIT.

Determining when the solar nebula has dissipated sets the time for gas-driven planetary migration and how long giant planets can grow (that’s because they grow by accreting gas), Borlina says. This helped the team understand what mechanisms were responsible for the nebula’s disappearance.

What has been the team’s biggest challenge?

Finding the right samples to study: These two meteorites are like needles in a haystack in that they are two of the best-preserved samples from the early solar system, Weiss says. Unlike tens of thousands of meteorites, these meteorites have experienced minimal heating and rusting from fluid since they formed 4.5 billion years ago, he says.

They also hadn’t been hit by very high pressures and therefore wouldn’t have been remagnetized, which may erase the record of the “primary” solar nebula, Borlina says. After selecting our samples, we can cut them into pieces of about a few millimeters and use a magnetometer to measure these samples, he explains.

What is most surprising about your results?

For the first 3 million years of the solar system’s history, our solar nebula had a very strong magnetic field (like the one on Earth’s surface today), Weiss says. Then suddenly, in no time, the magnetic field and the gas itself disappeared throughout the inner solar system, up to about 7 astronomical units (Earth-Sun distances), he says.

What is the result of this research?

Our next step is to measure the magnetic field at the very beginning of the solar system from measurements of inclusions rich in calcium and aluminum, the oldest known solids, Weiss explains. Determining how long the nebula lasted and how quickly it disappeared at different locations will help us understand how planets formed, he says.