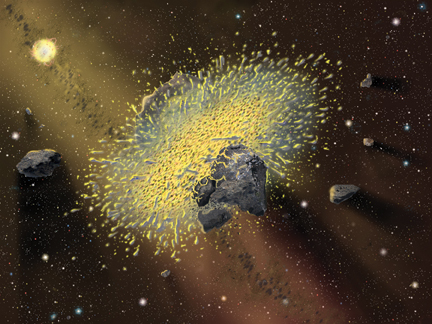 Astronomers report that they have obtained the best evidence yet for an asteroid belt beyond the solar system. Such a belt would suggest that the star Zeta Leporis, which lies just 70 light-years away, has not only asteroids but also rocky Earth-like planets.

The new measurements point to the location of a disk of hot dust that surrounds Zeta Leporis. The dust is about the same distance from the star as the solar system’s asteroid belt is from the sun, report Margaret M. Moerchen and Charles M. Telesco of the University of Florida at Gainesville and their colleagues. in February 1, 2007. Astrophysical Journal Letters.

Sign up for the latest news from Scientific News

Titles and summaries of the latest Scientific News articles, delivered to your inbox

Thank you for signing up!

A problem occurred during your registration.

Most of the previously observed disks have been cold and lie much further away from their parent stars, in the region in the solar system that corresponds to the location of Pluto and the reservoir of comets known as the Kuiper Belt.

The close dust around Zeta Leporis likely arose when multiple asteroids collided, grinding the rock into a fine spray of particles, or when a large asteroid, possibly 100 kilometers in diameter, suffered a cataclysmic shock, according to Moerchen and Telesco.

“The [precise] The measurement of the Zeta Leporis disk is a very exciting result,” says Charles Beichman of NASA’s Jet Propulsion Laboratory in Pasadena, California. “We now have direct evidence of structures around other stars that are directly analogous to the belt asteroids in our solar system. ”

Zeta Leporis came into the limelight in the 1980s when a satellite revealed that the star and its surroundings emitted far more infrared light than was expected from the star alone. It’s a sign that dust is swaddling Zeta Leporis.

In 2001, Christine Chen and Michael Jura of the University of California, Los Angeles observed the star with one of the telescopes at the Keck Observatory on Mauna Kea in Hawaii. They found that the dust is likely confined to a disk with a radius of no more than 6.1 astronomical units (AU) – slightly greater than Jupiter’s distance from the sun (SN: 6/16/01, p. 375: a nearby star may have its own asteroid belt).

In February 2005, the team led by Moerchen and Telesco observed Zeta Leporis with the Gemini South telescope at the top of Cerro Pachon in Chile. These observations for the first time allowed the researchers to accurately measure the size of the dust disk.

The team finds that most of the dust is concentrated at a distance of 3 AU from Zeta Leporis. This is similar to the location of the solar system’s asteroid belt, which extends between 2.1 and 3.3 AU from the sun.

Because asteroids are leftovers from the planet-making process in the solar system, the new study “supports the idea that Earth-like planets can exist” outside the solar system, Jura says. Compared to our sun, Zeta Leporis is a young one, but it’s still old enough to have formed planets.

Moerchen’s team plans further observations to reveal the shape of the Zeta Leporis disk. If circular and of uniform density, the disk was likely formed by the slow grinding of asteroids over thousands of years. A more distorted shape would suggest the dust was generated by a collision between two large chunks of rock only about 100 years ago, Telesco says.

“For years we have been studying Kuiper belt type disks; now we are studying the architecture of the interior regions of asteroids” around stars. “It’s kind of new territory,” says Telesco.

Astronomers Baffled by Basalt in the Outer Asteroid Belt