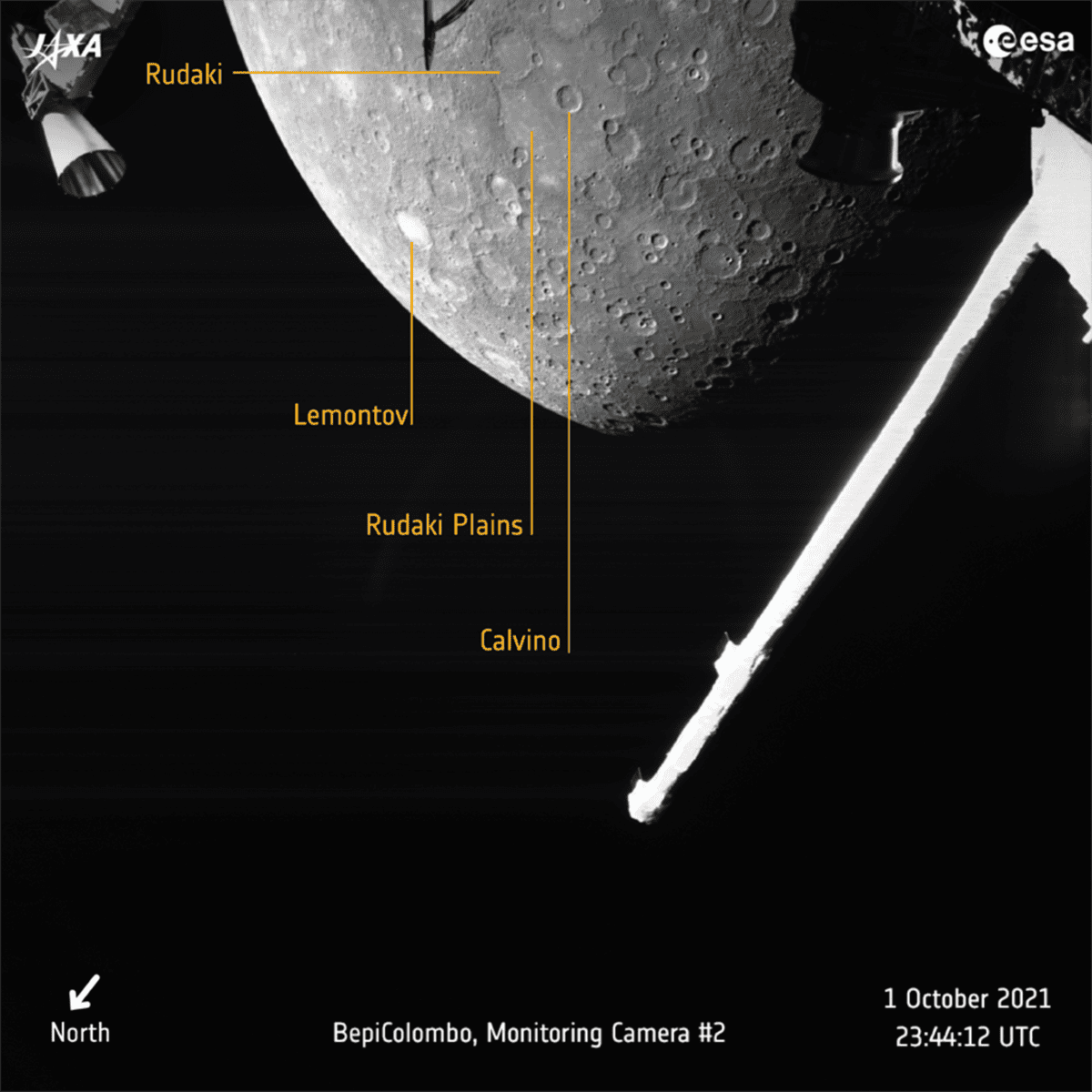 About a week ago, the BepiColombo spacecraft took a closer look at Mercury, the least explored planet in our solar system. Black and white photos of the mottled surface of Mercury are sent back to Earth.

It was a joint mission of the European Space Agency (ESA) and the Japan Aerospace Exploration Agency (JAXA) to study several mysteries of the celestial body such as questions such as why such a small planet has a magnetic field, the ice in the hot planet’s polar craters, the nature of the hollows and the mysterious bumps on the la surface of the planet. These bumps are not visible on any other planet in the solar system, which may be caused by the evaporation of volatiles inside Mercury. The flight over BepiColombo was a virtual touch as it arrived nearly 200 km from the planet.

Overflights are gravitational assist maneuvers that use the gravity of a planet to speed up or change the trajectory of a spacecraft.

There must be four more overflights of BepiColombo before the spacecraft is in the correct position to finally enter orbit the planet, which is expected to occur in 2025. It was the closest spacecraft to the planet. planet, he used the planet’s gravity for The eventual target scientific orbit around the planet in 2025 will maintain the spacecraft at a distance of 480 to 1,500 km.

According to the Japan Aerospace Exploration Agency, the mission was inspired by the late Italian astrophysicist, Dr. Giuseppe “Bepi” Colombo, who suggested that a spacecraft could approach Mercury several times using motion of Venus assisted by gravity.

Hence the name of the project, BepiColombo.

This will help determine how much it has in common with other planets and what elements are unique to Mercury as well as the origin and evolution of the terrestrial planets.

The 650 million euros ($ 750 million) BepiColombo mission, which took off in 2018, will take measurements of the environment around the planet and images of the surface of Mercury. BepiColombo’s next flyby at Mercury will take place in June 2023.

The National Aeronautics and Space Administration (NASA) American Mariner 10 spacecraft launched in 1973 was the first to reach Mercury and was the first to use the gravity of one planet (Venus) to reach another planet Mercury.

that of NASA robotic space probe MESSENGER “Mercury Surface, Space Environment, Geochemistry, and Ranging” became the first spacecraft to orbit Mercury between 2011 and 2015, studying the chemical composition of Mercury, geology, and magnetic field. Eventually, after completing his mission, he crashed onto the planet in 2015.

Mercury is the closest planet to the Sun and is a small planet with a radius of about 2,440 kilometers located inside the solar system.

Even today, we don’t know much about Mercury, one of the reasons clearly being that its observation from Earth with ground-based telescopes is not very easy because it is very close to the bright light of the Sun. .

Few spaceships have been sent close enough to Mercury to study it due to the intense radiation and heat of the sun.

Mercury is the smallest but fastest planet (moving in space at nearly 47 kilometers per second) in our solar system and the closest to the Sun completing its orbit around the sun or one year in 88 days.

On Mercury, the sun would be three times bigger than on Earth and seven times brighter. It is not the hottest planet in the solar system, however, even though the sun is approximately 36 million kilometers from it, the hottest planet is Venus due to a denser atmosphere.

With no moon surrounding it, it is rocky and slightly larger than the moon. Its exosphere is made up of gases such as oxygen, sodium, hydrogen, helium and potassium. Scientists believe that life as we know it would not survive because of solar radiation and extreme temperatures.