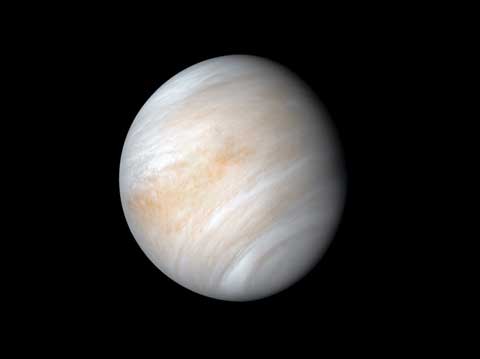 Spotlight on Science: Volcanism on the Planet Venus 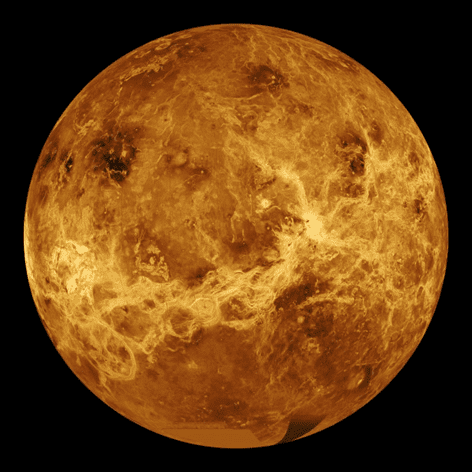 Venus is a terrestrial planet and the second planet from the Sun, called Earth’s “sister planet” due to its similar size, gravity and bulk composition. 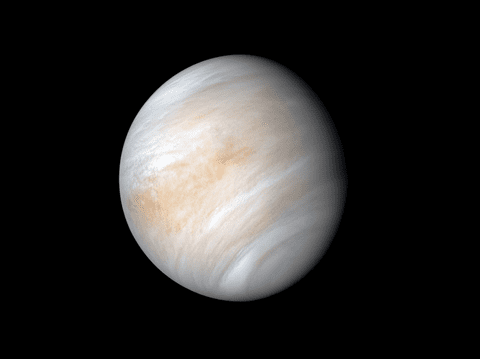 Surface conditions on Venus are extreme due to the planet’s proximity to the sun, lack of water, and atmospheric composition. Venus originally had a small Earth’s ocean, but due to the immense heat, the ocean evaporated and the planet’s hydrogen (H2) was lost to space. Venus is now dry and covered in reflective clouds of sulfuric acid that obscure its surface. The temperature is around 450 degrees Celsius and the atmosphere is 90 standard atmospheres (atms) thick. Much of the planet’s atmosphere is made up of carbon dioxide (CO2). Probes sent to Venus do not last very long under such conditions. The Venusian surface was a bit of a mystery before it was first mapped by NASA’s Project Magellan in 1990 and 1991.

The Magellan spacecraft sent short-wavelength gravity measurements and radar images back to Earth. Much work on the crustal and tectonic processes of Venus has been produced as a result, and much remains to be learned. The surface of the planet is different from that of the Earth because the absence of water has reduced erosion. About 80% of it is covered with volcanic plains. 70% of these plains contain ridged ridges, while 10% of the flows are lobed. Two mainland highlands make up the rest of its surface. One of the highlands is in the northern hemisphere of the planet, while the other is just south of the equator. The northern continent is called Ishtar Terra. The southern continent is called Aphrodite Terra.

Volcanism is the most important geological phenomenon on Venus. Volcanic deposits cover most of the surface and occur in a variety of ways. The presence of sulfur in the atmosphere may mean that eruptions have occurred recently. Some forms of Venusian volcanism have terrestrial analogues, others do not. Not all volcanic activity on Venus is well understood.

Venus shares some similar planetary traits with Earth. The planet has a basalt crust 25-30 km thick. Its mantle is around 1300 degrees Celsius. Mantle convection is dynamic, producing plumes that cause uplift, rifting, and volcanism. However, apart from its unusual global resurfacing events, Venus does not have regular large-scale plate tectonics.

The composition of the surface of Venus is mainly basaltic. Satellite Aperture Radar (SAR) images show basalt flows resembling those on Earth, as well as volcanic flows covering areas similar in size to terrestrial provinces flooded with basalt. However, these basaltic flows are more viscous than those encountered on Earth. Some castings, festoons, are striated lobed castings. These characteristics indicate an extraordinarily high viscosity. Like Earth, Venus has cinder cones, shield volcanoes, and calderas. 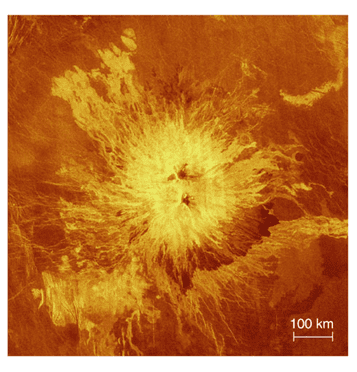 The shield volcanoes of Venus are several hundred kilometers in diameter and less than 2 km high. They are weak compared to shield volcanoes on Earth due to the contrast in density between the lava and source and surface rocks. Density differences may be less on Venus than on Earth because the higher temperature gradient leads to shallower magma sources and volatile exsolution is restricted during magma ascent. 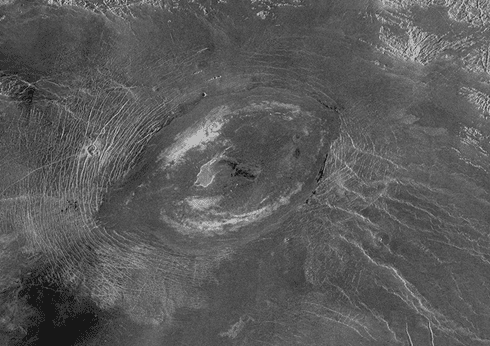 Calderas are circular depressions and are characterized primarily by concentric patterns of fractures and a flat interior region. They are 40-80 km wide. Calderas form through the evolution of magmatic diapirs and the release of pressure melting into a diapir head, similar to the arachnoids and coronae discussed below. Moderate or low volcanism is associated with calderas, and they can occur without the prior formation of composite volcanoes or shields. Despite the absence of water, there is evidence of explosive volcanism on Venus. 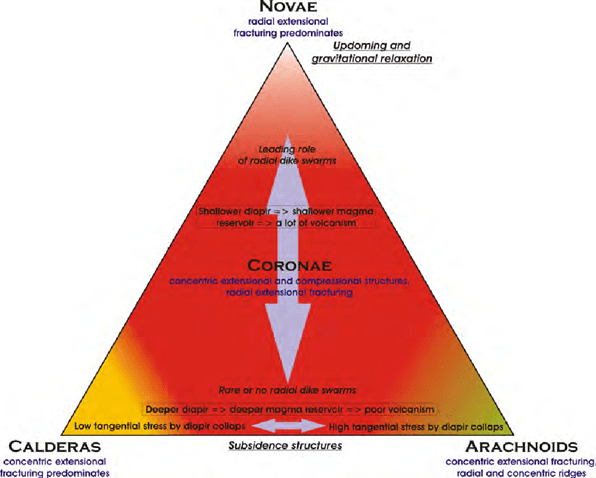 There are four types of volcanic features unique to Venus: coronas, novae, “pancake” domes, and arachnoids. These features are classified according to their geomorphology and formation mechanisms. 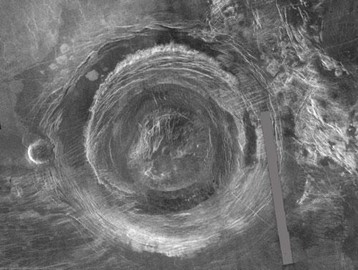 The crowns (singular crown) have diameters of 100 to 1000 km. They are circular with ridges and fractures, have a topographically inflated or deflated interior, have a surrounding moat, and internal volcanic or tectonic structures. Crown shapes may vary. Radial fracturing, concentric fracturing and compressional tectonic structures are common features of crowns. Coronas result from bowing and fracturing due to the interaction of mantle diapirs with gravitational relaxation of the lithosphere. 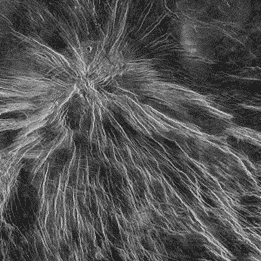 Novae (singular nova) have a diameter of 100 to 300 km and are radially fractured. Their fractures form a star composed of several blocks. A nova typically exhibits raised topography or inflation. Novae are the result of surface dishing and fracturing due to the interaction of mantle diapirs with the lithosphere. Radial fracturing results from the installation of dykes. 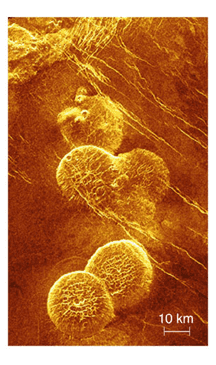 A pancake dome is an unusual “pancake” shaped lava dome found only on Venus. These characteristics often form groups or clusters. They are generally associated with other forms of Venusian volcanism, such as coronae and novae. 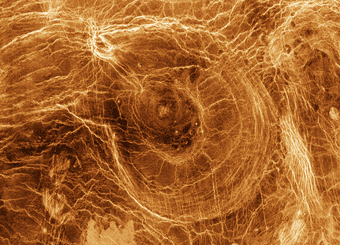 Arachnoids are characterized by circular patterns of ridges and radial fracture patterns or outward extending ridges. They are depressions 50 to 175 km in diameter with small amounts of associated volcanism. They are formed by the evolution of mantle diapirs. High shear stress during arachnoid formation leads to radial fractures. Some arachnoids look like crowns.

The geological evolution of Venus is still uncertain due to a lack of samples and age constraints. Radar images obtained by the Magellan mission revealed a low number of craters. The impact crater record gives an average production age of 300 to 600 million years ago (Ma) and a uniform distribution over the entire surface of the planet. No more than 10% of the craters have been altered by volcanism. These observations suggest that a catastrophic volcanic event has removed all evidence of older surface materials and earlier craters. In other words, Venus underwent a resurfacing event – a gradual resurfacing or global resurfacing event ending between 300 and 600 Ma. The last global resurfacing occurred in less than 100 Ma and was followed by a decrease in volcanic activity. Two potential resurfacing mechanisms have been suggested to explain the above observations: resurfacing by plate tectonics and resurfacing by plume activity.

Plate tectonics, creation of lithosphere at the expansion ridges and subduction at the trenches, could explain the resurfacing. Since the last resurfacing event lasted 100 Ma, the average age of the surface during this time must have been 50 Ma. This age matches the average age of oceanic lithosphere on Earth. The lack of evidence for current plate tectonics on Venus does not mean that plate tectonics could not have existed before the event, or that plate tectonics could not have been responsible for it. However, it is unclear whether the plate movements could stop within the 100 Ma timescale required by the crater record.

The other suggested mechanism of resurfacing is plume generation. Because less than 20% of the planet has resurfaced in the last 500 Ma, the overall production rate must have been at least 25 times the current rate for the duration of the event. Such a rate could be achieved by increasing the number of plumes, increasing the potential temperature by 200 degrees Celsius, reducing the thickness of the cover, or reducing the temperature of the solidus. However, it is not clear that any of these processes could produce a resurfacing event greater than 100 Ma. The activity of the plume is not sufficient to explain the style of resurfacing required by the crater record. Therefore, the true mechanism of periodic resurfacing events on Venus is not yet evident and remains up for debate. Venus could exhibit similar behavior in the future, but there is no guarantee that this will happen in our human lifetimes.