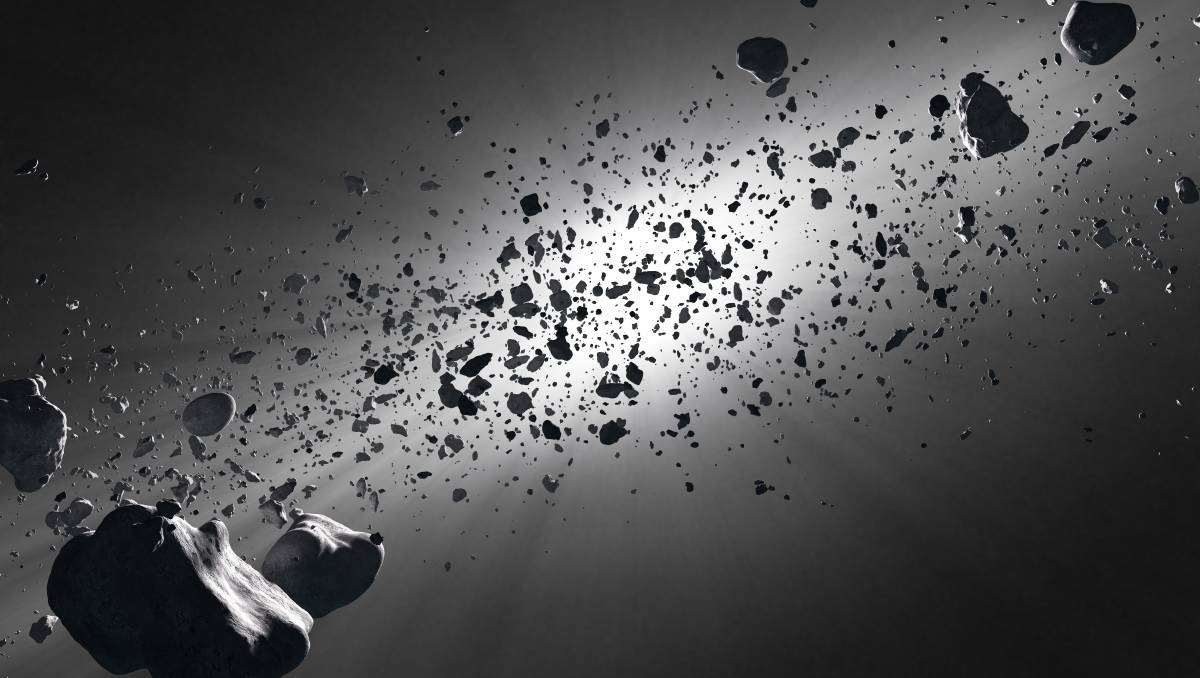 How was the asteroid belt formed? I’ve heard that there would have been another planet there, but there doesn’t seem to be enough material for a planet.

That’s a great question, Jessie. To answer it, we need to board a time traveling spacecraft and return to the birth of the solar system itself.

Let’s go back to about 4.6 billion years ago, just before the solar system existed. Imagine we are floating in our spaceship in Orion’s arm of the Milky Way, which is our galactic address – but the Sun and the planets are not there yet. Instead, when we look out the spaceship window, we see the dark void of space.

But suspended in this void is a gigantic cloud of gas and dust. They are cosmic debris, left behind by the explosion of a star.

As we watch, the cloud spins, slowly at first, then faster and faster. It’s like an ice skater, spinning slowly when his arms are thrown out, and faster when he pulls his arms in. (Try this at home: Instead of ice skates, use a spinning office chair.)

Because we are in a time traveling spacecraft, we can speed up time a little bit and watch what happens.

Over the years, the spinning cloud of gas and dust begins to flatten into a disc, like a Frisbee. It also heats up to a scorching temperature.

Soon the center of the cloud gets so hot that a star ignites – our newborn Sun.

The Sun is made up of much of the gas and dust from the cloud, but there is a lot left, which always revolves rapidly around it.

It’s quite spectacular to watch from our spaceship. We would see these rocky quasi-planets shatter and crash into each other in a series of violent collisions. From a million tiny dots, the planets we know and love today form, from Mercury right next to the Sun to Neptune in the cold confines of the solar system.

Even after the planets were born, we can see that there are still pieces of rock left – the things that did not end up on the planets. We call these asteroids. They are made up of rocks and metals like iron and nickel. Some rooms are small, just a few feet wide, while others are over 900 kilometers wide (about the distance from Melbourne to Sydney, if you’ve been on that trip before).

They are still orbiting our newborn Sun. Some asteroids are scattered throughout the solar system, but most of them are grouped together in a ring between the planets of Mars and Jupiter. This is because Jupiter is huge and has a great gravitational pull on all other objects in the solar system. He acts like a shepherd and guides all of the asteroids into place, in what we now call the asteroid belt.

It’s true that there are big objects there, like Ceres – which is one-third the mass of the entire asteroid belt! Astronomers call it a dwarf planet.

But if you could glue all the asteroids, including Ceres, you would end up with a planet even smaller than the Moon (which is already only a quarter the size of Earth).

Thus, astronomers no longer think of the asteroid belt as a shattered planet. Instead, they think it formed the way we saw through the window of our time traveling spacecraft.

Now let’s step back in time and get back to our days – it’s time to get off our spaceship.

Our journey through the asteroid belt must not be over. From here on Earth, here and now, you can look up into the night sky using binoculars or a telescope and spot large asteroids like Pallas, Vesta, and Juno.

If you’re not sure where to look, go online and check out the Melbourne Planetarium Skynotes. The skies are constantly changing, so each month they will tell you interesting things to spot, from asteroids to planets to constellations. You can also see comets and meteors, which are remnants of the birth of the solar system, just like asteroids.

Scan above to submit your question.

ACM has teamed up with Cosmos, Australia’s only independent science newsroom, to satisfy your curiosity and help answer those curly science questions swirling in your brain.

Use the QR code to ask us any wacky, practical, or trivial science questions you have and we’ll find the right person to answer them.

In search of a ‘second Earth’, astronomers discover a hot, dense planet with an eight-hour year