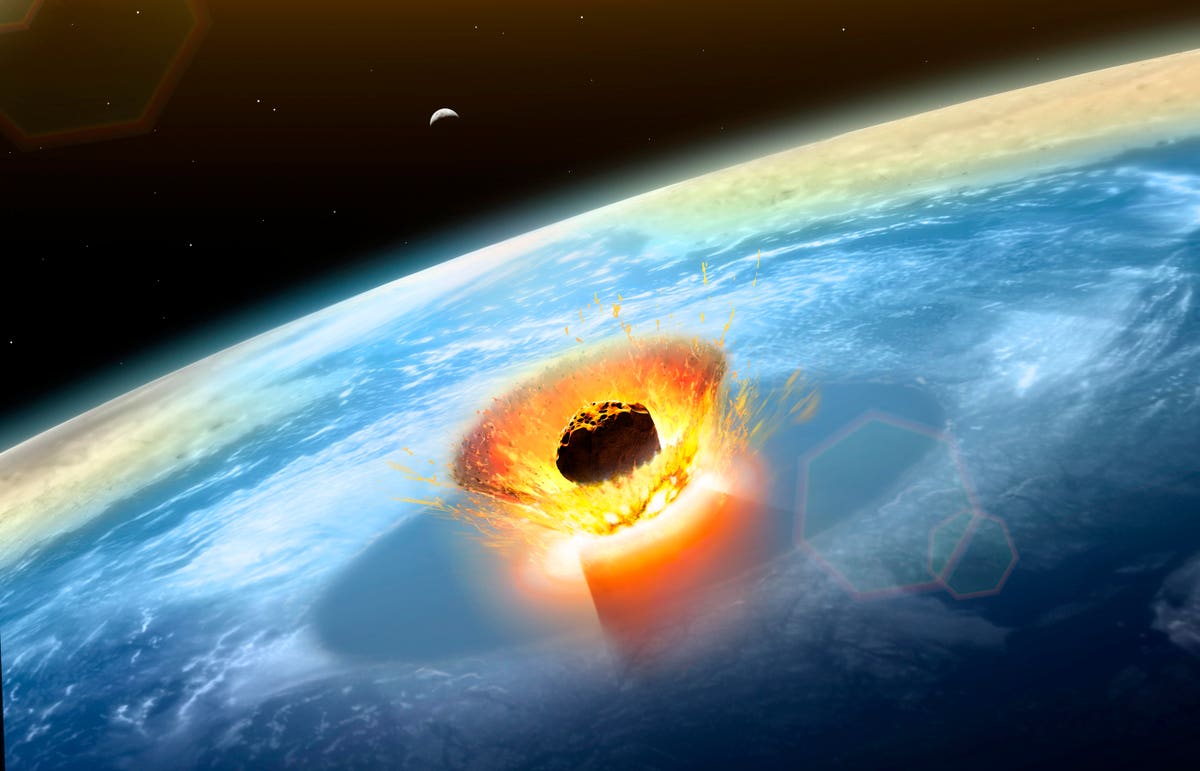 A meteorite about 10 kilometers (6.2 miles) in diameter that would have wiped out about 76% of all species on Earth – including dinosaurs – some 66 million years ago likely originated from the outer half of the main asteroid belt, a region previously thought to produce few impactors.

The impact formed the Chicxulub Crater, which is about 200 kilometers (90 miles) wide, along the coast of the Yucatan Peninsula. The impact would have thrown billions of tons of dust into the atmosphere, significantly cooling Earth’s climate, which could be responsible for mass extinction. A layer of clay rich in iridium marking the boundary between the Cretaceous and the Paleogene is believed to be the remains of the impact debris.

Researchers at the independent Southwest Research Institute (SwRI) in San Antonio, Texas, combined chemical traces of the impactor preserved in the impact crater, observations of known asteroid trajectories, and computer models to study the origin and the frequency of so-called Chicxulub events. .

Geologists have previously examined 66 million-year-old rock samples recovered from drill core in the Chicxulub crater. The results indicate that the impactor was similar to the meteorite class of carbonaceous chondrites, considered primordial remnants of the formation of the solar system and called dark primitive asteroids due to their dark gray color.

While carbonaceous chondrites are common meteorites, none today are close to the sizes needed to produce the Chicxulub impact.

“We decided to look for where the Chicxulub impactor siblings might be hiding,” lead study author Dr David NesvornÃ½ said in a statement released by SwRI.

“To explain their absence, several past groups have simulated large ruptures of asteroids and comets in the inner solar system, examining the surges of impacts on Earth with the largest crater producing the Chicxulub crater,” said Dr William Bottke, one of the co-authors of the article. authors. “While many of these models have interesting properties, none satisfactorily matched what we know about asteroids and comets. It seemed like we were still missing something important.”

The researchers used computer models that track how objects escape from the main asteroid belt, an area of â€‹â€‹small planetary bodies located between the orbits of Mars and Jupiter. Over eons, gravitational forces can push asteroids into orbits close to Earth. Using NASA’s Pleaides supercomputer, the team tracked 130,000 slowly and steadily evolving model asteroids over hundreds of millions of years. Particular attention was paid to asteroids located in the outer half of the asteroid belt, the furthest part from the Sun. To their surprise, they discovered that 10-kilometer-wide asteroids from this region hit Earth at least 10 times more often than expected.

“This result is intriguing not only because the outer half of the asteroid belt is home to a large number of carbonaceous chondrite impactors, but also because the team’s simulations can, for the first time, replicate the orbits of large asteroids about to approach Earth, “said co-author Dr Simone Marchi. “Our explanation of the source of the Chicxulub impactor fits perfectly with what we already know about the evolution of asteroids.”

The team found that Chicxulub-sized asteroids hit Earth once every 100 to 250 million years on average, and that half of the impacts were from carbonaceous chondrites, which is what we believe. knows of the Chicxulub impactor.

“This work will help us better understand the nature of Chicxulub’s impact, while also telling us where other large impactors of Earth’s deep past might come from,” NesvornÃ½ said.