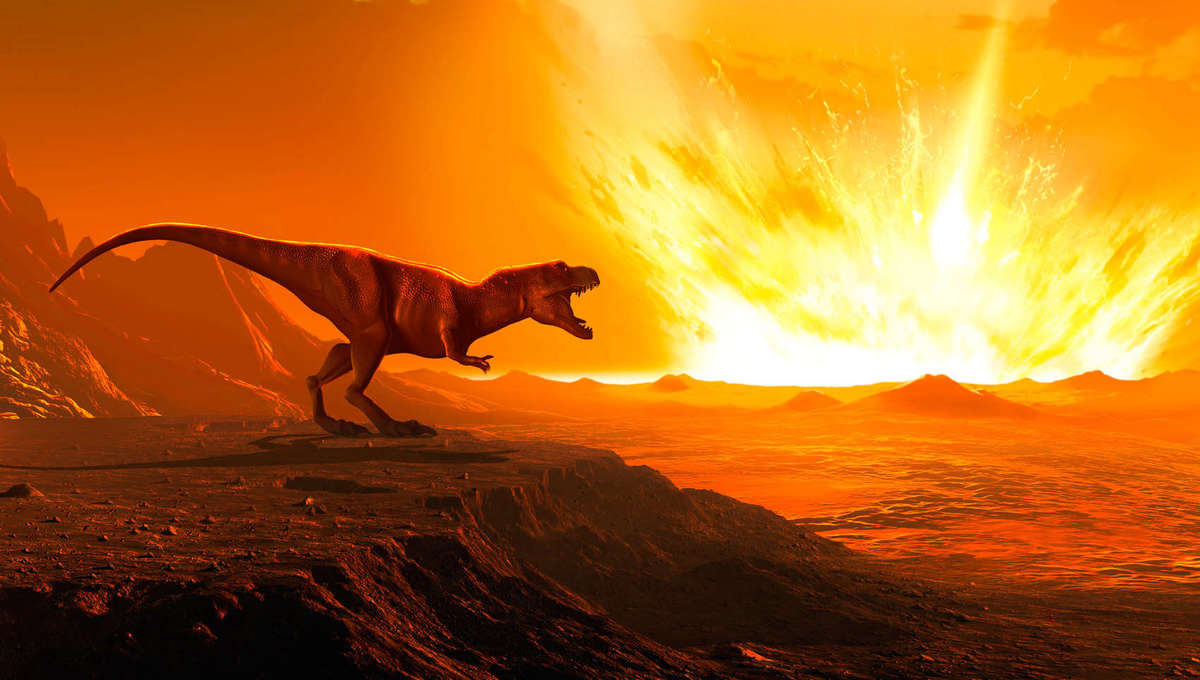 The dinosaur-killer asteroid likely came from the outer asteroid belt

Where did the dinosaur killer asteroid come from?

It is a question of great scientific interest and fascinating to the public. We know that 66 million years ago, a 10-kilometer-sized asteroid crashed into Earth just off what is now the Yucatan Peninsula in the Gulf of Mexico, carving out the Chicxulub crater. 180 kilometers wide and setting off a complicated chain. events that killed around 75% of all species on the planet including all non-avian dinosaurs, so yes understanding that seems important.

For a while it was thought to be a comet, but samples of the impactor recovered from various sites around the world and dated to the time of impact strongly suggest that it was acted as a kind of asteroid called a carbonaceous chondrite. A chondritic asteroid is a primitive asteroid, formed when the solar system was very young, and made up of small grains of matter that have not undergone any real change since. Chondrites make up the vast majority of meteorites that fall to Earth, over 80%. On the other hand, carbonaceous, rich in carbon and therefore dark, are quite rare, representing only 3 to 5% of meteorites that fall on Earth.

The impactor therefore comes from a rare population of asteroids. Here’s where things get a little weird: When you look at the largest craters on Earth, possibly from the larger asteroids, something like half appears to be produced by carbonaceous chondrites. So while they are rare globally, the big ones seem to like to hit the Earth.

In addition, it is known that these types of large black asteroids tend to orbit in the outer part of the asteroid belt, further from the Sun. However, theoretical studies have shown that very few impactors were to be expected from this part of the belt.

So here we have conflicting ideas. Where do these big black rocks come from? And how often do they hit us?

To investigate, a team of astronomers modeled the behavior of the asteroids in the main belt. It has been done before, but they did something a little different.

What they wanted to know was how the main belt asteroids are thrown into orbits that bring them closer to Earth (too much close, if you know what I mean). In general, this is due to the gravity of Jupiter, which has a strong effect, but is limited to certain regions of the belt – the so-called resonances, where the asteroid’s orbital period is a mere ratio of that of Jupiter. In this case, the asteroid orbits the Sun, say, three times for every time Jupiter does, or 8 to 3, or 5 to 2. When this happens, the rock receives a periodic hit of orbital energy of the giant planet, and this can, over time, send it tumbling towards the Sunâ€¦ and the Earth.

Another force is called the YORP effect and is caused by sunlight which subtly influences the orbit of the asteroid. This has been modeled several times, but in general the models have focused on the parts of the belt where the resonance effects are strongest.

What’s new here is that the team reviewed the all asteroid belt as a potential source of large dark and threatening rocks. They also preferred to look at large rocks, those with a diameter of 5 kilometers or more, and which also orbit the Sun at more than 375 million kilometers on average; using real data from the WISE observatory (an infrared satellite that has observed asteroids) or 42,721 objects.

They used computer simulations to model the physics of how asteroids move over a billion years, including the effects of all planets (except Mercury, which is too small for them. affect) and the YORP effect. Typically, YORP changes an asteroid’s orbit very slowly over time until it resonates, and then the rock quickly moves to a potentially threatening new orbit.

What they found is surprising. On half Large Main Belt rocks that move in near Earth orbits originate from the middle and outer parts of the asteroid belt! This is 10 times higher than previous estimates, which said asteroids in this part of the belt were rare. But this does fit with the result that something like half of the large rocks that hit us are carbonaceous chondrites, since these originate from the outer belt. If that’s true, it resolves that tension. They find that the odds of the dinosaur slayer coming from the middle to the outer main belt are 60%.

They also found that an asteroid 5 kilometers or more wide escaped the Main Belt in a near-Earth trajectory about every 100,000 years. These tend to break or fall into the Sun after about a hundred million years or less, but some impact the inner planets. According to their simulations, we can expect about 25 impacts from asteroids over 5 km in size every billion years, or about one every 40 million years. A 10 km dinosaur killer is rarer, once every 250 to 500 million years. These figures correspond quite well to what has been observed with regard to the large impacts on Earth.

So does this solve the mystery? Well, a little. This shows that a lot more rocks from the outer belt can possibly hit us, which is a big step. There is some evidence that while the large dark rocks originate from the outer belt, the smaller dark ones originate from the inner belt, suggesting that the forces acting on these rocks are different for different parts of the belt. In addition, the inner belt seems to produce less large rocks that can affect us than the older models predicted. We do not know why.

There’s still a lot to figure out here, but it’s typical. Massive computers take a long time to perform simulations, so as they speed up, it becomes easier to run various models and change settings. Usually this means that we learn more as new things are tried and found to work … or most importantly not work, because sometimes old ideas turn out to be wrong. It’s science.

Every step we take here brings us one step closer to understanding what happened millions of years ago when dinosaurs had a Very Bad Day â„¢. If we want to make sure we have a future – at least when it comes to asteroid impacts – then learning more about how these rocks behave is a very good idea.