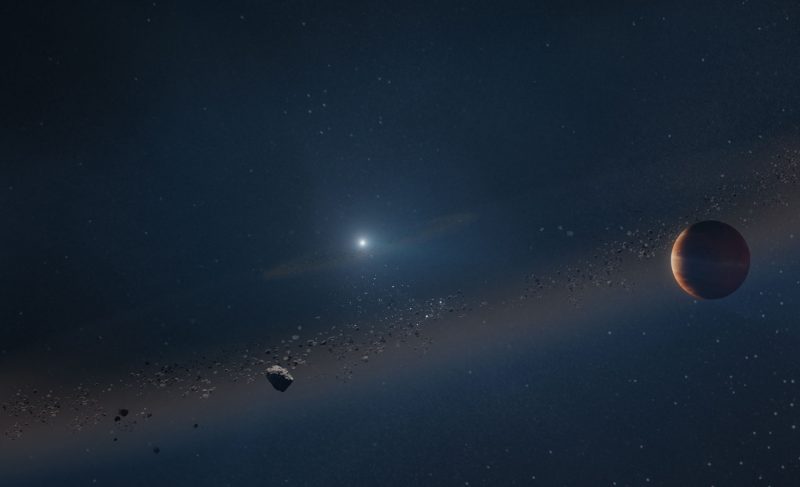 The future of the solar system seen: 1st planet around a white dwarf

Scientists now have proof that some of the planets in our solar system can survive the death of our sun. They said on October 13, 2021 that they had found a star system – about 6,500 light-years away, towards the center of our Milky Way galaxy – consisting of a star once like our sun but now a dwarf. compact white. This star has an ever-orbiting gas giant planet, similar in size and orbit to the large planet Jupiter in our solar system. It’s proof that Jupiter (at least) can and will survive when our own sun swells into a red giant, just before it enters the white dwarf stage of evolution of stars. The recently discovered Jupiter-sized planet now circles the cold, scorched remnants of its star. And so, for the first time, we glimpse the future of our own solar system, about 5 billion years from now.

astronomers published their study on October 13 in the Peer-reviewed newspaper Nature.

Astronomers made the discovery with the WM Keck Observatory in Hawaii. Main author Joshua Blackman from the University of Tasmania noted:

This evidence confirms that planets orbiting at a sufficiently large distance can continue to exist after the death of their star. Since this system is an analogue of our own solar system, this suggests that Jupiter and Saturn could survive the red giant phase of the sun, when it runs out of nuclear fuel and self-destructs.

The Future of the Solar System: Outer Planets vs. Inner Planets

Scientists have long wondered if the outer planets would be immune to the star’s puffy red giant phase and stick around for the long haul. Now they have proof that they will. But Earth’s prospects for existing beyond the red giant phase may be bleak. When the sun transforms into a red giant, scientists expect it to swallow up Mercury, Venus, and possibly Earth as well. Therefore, humanity will need an escape plan to survive. Co-author David Bennett from the University of Maryland and NASA’s Goddard Space Flight Center said:

Earth’s future may not be so rosy as it is much closer to the sun. If humanity wanted to move to a moon of Jupiter or Saturn before the sun scorched Earth during its red supergiant phase, we would still be orbiting the sun, although we could not rely on the heat of the sun as a white dwarf for a very long time.

The sun is a main sequence Star. Main-sequence stars are medium-sized stars that, as they age, burn up their hydrogen and begin to grow into red giants. It is the red giant phase that can devour the living Earth, depending on its size before the sun collapses in on itself and swells its outer layers. Then the sun settles into the rest of its existence as a cooling white dwarf. A white dwarf is essentially a dead star.

A white dwarf is about the size of Earth with a mass about half that of the Sun. Due to their small size and cool temperatures, they are weak and difficult to detect. The Keck telescope used a resolution close toinfrared imagery to locate this white dwarf and this planet. Gravitational microlensing revealed the pair. Gravitational microlens it’s when a nearby star aligns with a distant star. The nearest star acts as a lens, magnifying the light from the farther star.

Scientists noticed a distortion in the light from the lensed star, and that’s what led to the discovery of the exoplanet. The white dwarf is about 60% of the mass of our sun. Its exoplanet is about 40% more massive than Jupiter. Due to its low luminosity, scientists ruled out that the light from this star came from a main-sequence star or a brown dwarf. Co-author Jean-Philippe Beaulieu from the University of Tasmania explained:

We were also able to rule out the possibility of a host neutron star or black hole. This means that the planet is orbiting a dead star, a white dwarf. It offers a glimpse of what our solar system will look like after Earth disappears, swept away by the cataclysmic demise of our sun.

Scientists are using their new data to help discover how many other planets have survived and are orbiting white dwarfs. the Nancy Grace Roman Telescope, slated for launch in the middle of this decade, will be able to directly image giant planets. The Roman space telescope should be able to study planets orbiting white dwarfs as far away as the galactic bulge. John O’Meara of the Keck Observatory sums it up:

This is an extremely exciting result. It’s wonderful to see today an example of the kind of science that Keck will do en masse when Roman begins his mission.

Conclusion: Scientists got a glimpse of the future of the solar system when they discovered a gas giant planet orbiting a white dwarf. One day our sun will grow into a red giant and then shrink into a white dwarf, where it will spend the rest of its life.

Kelly Kizer Whitt has been a science writer specializing in astronomy for more than two decades. She began her career at Astronomy Magazine and has been a regular contributor to AstronomyToday and the Sierra Club, among others. Her children’s picture book, Solar System Forecast, was published in 2012. She has also written a dystopian novel for young adults titled A Different Sky. When she’s not reading or writing about astronomy and gazing at the stars, she enjoys traveling to national parks, creating crossword puzzles, running, playing tennis and paddle boarding. Kelly lives with her family in Wisconsin.