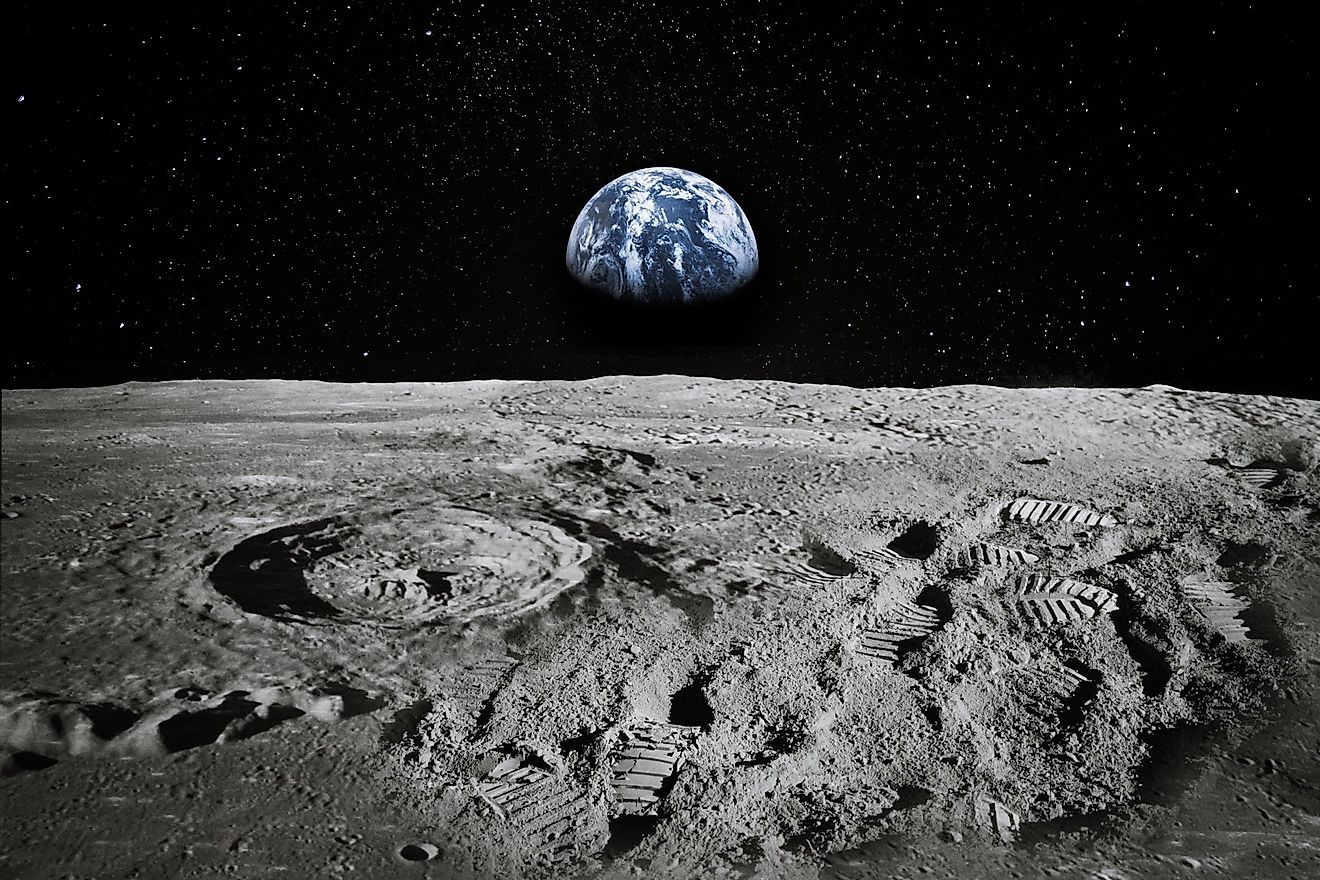 The largest moons in our solar system

The solar system does not lack moons. Like the planets they orbit, they are each unique in their own way. Some moons are so large that if they were orbiting the Sun instead of a planet, they would likely be considered planets in their own right. Others are so small that they are more closely related to asteroids and meteors than to planets. The solar system contains hundreds of individual moons, the majority of which orbit Jupiter and Saturn. In fact, Jupiter and Saturn have so many moons that scientists keep discovering more in their orbits. Since there are so many moons, it would be difficult to list them all and compare their size. Let’s focus instead on the ten largest moons in the solar system.

Orbiting the planet Jupiter is the largest moon in the solar system. Called Ganymede, it is 3,275 miles (5,270 kilometers) in diameter. This makes Ganymede even larger than the planet Mercury, which is 3,032 miles (4,879 kilometers) in diameter. If Ganymede formed orbiting the Sun rather than Jupiter, it would likely be defined as a planet. Ganymede was one of the first planets discovered in our solar system. In 1610, astronomer Galileo Galilei pointed a telescope at Jupiter and identified four bright spots surrounding the giant planet. After several observations, Galileo determined that these four luminous points were in orbit around Jupiter. Galileo found these four objects to be moons orbiting Jupiter, and they were later named the Galilean moons of Jupiter. Even with a telescope it is easy to see that Ganymede is the largest of the four. In terms of appearance, Ganymede resembles Earth’s moon: a heavily cratered, gray-colored surface. However, appearances can be deceiving. Ganymede is a unique planet, and it is the only moon in the solar system that produces its own magnetic field. Additionally, Ganymede is thought to have an ocean of liquid water beneath its crust. Ganymede orbits Jupiter at a distance of 1.07 million kilometers and completes one orbit every seven Earth days.

The second largest moon in the solar system is Saturn’s largest moon, Titan. It is only slightly smaller than Ganymede, with a diameter of 3,200 miles (5,150 kilometers). Like Ganymede, if Titan were to orbit the Sun rather than a planet, it would be considered a planet itself. Titan was discovered by astronomer Christiaan Huygens in 1655, but just about everything about Titan will remain a mystery for centuries. In 1944, astronomer Gerard Kuiper discovered that Titan has a large atmosphere, unlike most moons in the solar system. It may be similar in size to Ganymede, but Titan is a very different world. Not only does it have an atmosphere, but it also has an intriguing surface.

Unfortunately, Titan’s surface is hidden beneath its dense hydrocarbon atmosphere. It wasn’t until the Cassini mission, launched in 1997, that scientists got their first glimpse of Titan and its mysterious surface. When Cassini arrived on Saturn in 2004, he deployed the Huygens probe. Huygens’ mission was to enter Titan’s atmosphere and land on the surface. Huygens gave scientists their first good look at the surface, revealing a world that looked more like Earth than a typical moon. The exterior was covered with rivers, streams, lakes and seas. However, unlike Earth, temperatures on Titan are far too cold for water to exist in liquid form. Instead, the liquid on Titan’s surface is liquid methane and ethane. It even rains liquid methane on the surface. Titan and Earth are the only two known worlds in the solar system where it rains. Titan orbits Saturn at a distance of 759,000 miles (1.2 million kilometers) and completes one orbit every 16 Earth days.

In 1610, Galileo discovered the four large moons of Jupiter. The farthest from Jupiter was called Callisto. Callisto is Jupiter’s second largest moon and the third largest in the entire solar system, with a diameter of 2,995 miles (4,820 kilometers). Callisto’s surface is heavily cratered and is probably the least active world in the solar system. There is little or no history of geologic activity on Callisto, so its surface has seen virtually no change in its 4.5 billion year history. Callisto has the oldest known surface in the solar system. Callisto orbits Jupiter at a distance of 1.17 million miles (1.88 million kilometers), making it the farthest moon from Jupiter. It takes Callisto 17 Earth days to orbit Jupiter.

Io is one of four Galilean moons of Jupiter discovered by Galileo in 1610. Io is Jupiter’s innermost moon and is 2,264 miles (3,643 kilometers) in diameter. Although Galileo discovered Io over 400 years ago, virtually everything about Io was a mystery until Voyager flybys in the late 1970s. When scientists received the first close-up images of Io , what they saw was incredible. The surface was entirely devoid of impact craters, which is odd given the number of craters on other moons around Jupiter. Stranger still, the surface of Io was covered in different colors, including yellow, red, and green. Io looked completely different from any other moon. When scientists were analyzing images of Io taken by Voyager, one stood out.

This particular image of Io had a strange crescent shape just on the surface of Io. At first, scientists assumed that this crescent was just another moon behind Io. However, the orbital paths of nearby moons did not match the image. They soon realized they were observing a volcanic eruption on Io. The crescent was volcanic material rising from the surface and escaping into space. Io was found to be the most volcanically active world in the solar system, with over 400 confirmed active volcanoes. This was a surprise for a moon barely larger than our moon.

Generally, small planets lose their internal heat quickly after they form. As a result, most moons in the solar system are cold and inactive. There is no energy to fuel geologic activity without any internal heat that would otherwise reshape the surface. This is why most moons are covered in craters. Io apparently breaks this rule. It’s a small world, but it must contain enough internal heat to power hundreds of active volcanoes. Io’s internal heat source comes from friction in its core. This friction is created when Jupiter’s gravity pulls on Io, compressing and stretching the moon. Io orbits Jupiter at a distance of 262,000 miles (421,700 kilometers) and completes an orbit every 1.8 Earth days.