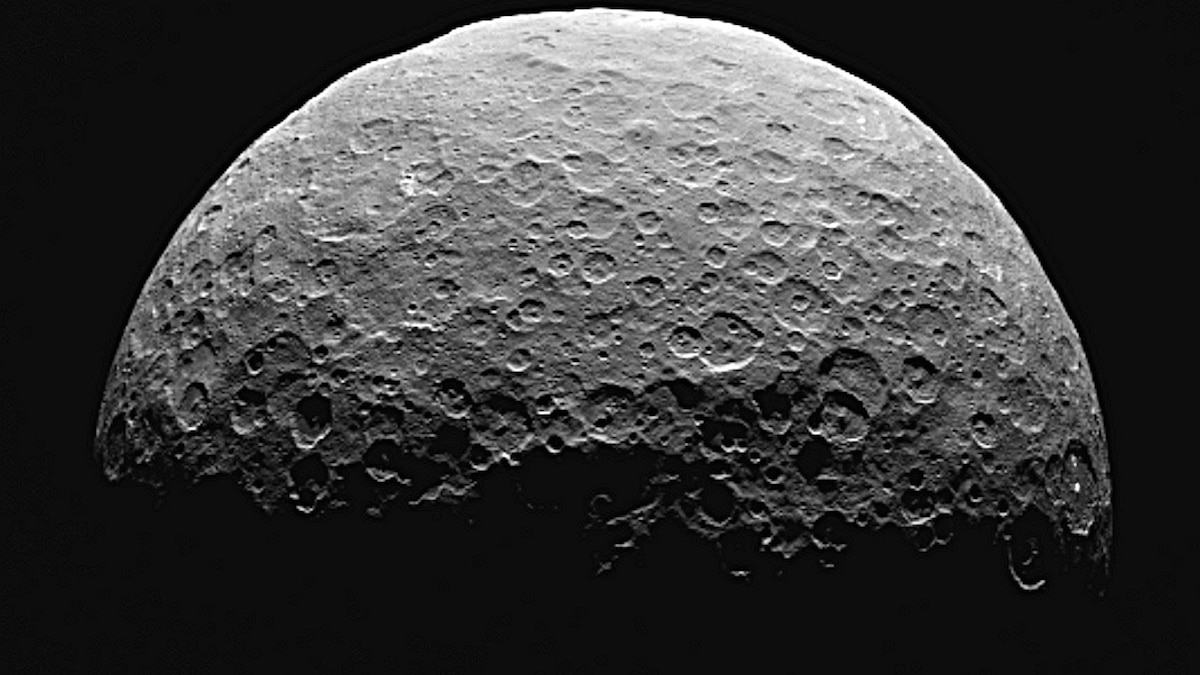 Controversial new observations from NASA’s Dawn spacecraft, which orbit the dwarf planet Ceres since March, suggest the 4.6 billion-year-old body may have been hurled into the main asteroid belt from the outskirts cooler in the solar system.

Dawn’s discovery of ammonia-containing clays on the surface of the world, reported on November 9 at the annual meeting of the Division of Planetary Sciences, points to this intriguing scenario. Their presence indicates that Ceres was born somewhere beyond Neptune’s orbit, where the weaker glare from the sun would not vaporize and disperse the ammonia as the minerals formed. Then, over the next 500 million years, gravitational surges may have thrown the dwarf planet inward, delivering it to the main asteroid belt between Mars and Jupiter.

There is of course another possibility.

“Either Ceres formed further and was then implanted in the Main Belt,” explains Simone Marchi of the Southwest Research Institute, “or it grew to its current position with the contribution of materials from the outer solar system.”

The idea of â€‹â€‹Ceres as the graft of the inner solar system comes as no complete surprise. For starters, Ceres is unlike any of its neighboring space rocks: it’s round, it’s by far the biggest thing in the belt, and it’s much more watery than anything else nearby. It’s more like a hotter version of the frozen moons orbiting Jupiter and Saturn.

â€œCeres is fundamentally unique, in terms of the objects we’ve been to,â€ says Andy Rivkin of the Johns Hopkins Applied Physics Laboratory. â€œThe Moon is rocky; Pluto is freezing cold. Ceres is the only one you watch with aspects of both, and that makes it a great way to learn more about both.

The flat-bottomed soft craters of the dwarf planet, the enigmatic luminous points, a possible ice volcano, and tufts of water vapor hint at a world with something exciting happening beneath the surface. Even more telling, perhaps, is that its density is similar to that of Pluto, which lives in the region beyond Neptune’s orbit.

Thank you for respecting copyrights. Unauthorized use is prohibited.

Researchers have been studying Ceres for a long time, but ground-based telescopes have not been able to convincingly identify ammonia because they have had to contend with Earth’s obstructive atmosphere. The orbiting Dawn spacecraft has a more ideal perch for observing how molecules on the surface of the dwarf planet reflect various wavelengths of light. It was in these wavelengths that Dawn investigator Carle Pieters and his colleagues spied on the signature ammonia phyllosilicates, which are clay-like minerals on Earth, mixed with other materials.

Today, Ceres is far too hot for a volatile molecule like ammonia to survive on its own – it would simply drift off as a vapor. This means that the ammonia must have bonded to these minerals when the mixture was somewhere much colder, meaning Ceres flew from afar or was bombarded by ammonia-containing material from further afield.

Of the two scenarios, Bill McKinnon of Washington University in St. Louis finds Ceres’ icy origin more plausible. “The idea that ammonia pebbles would drift to cover Ceres seems like a fool,” he said, noting that everything in the middle and outer asteroid belt would be covered in ammonia as well, which didn’t is not observed.

But figuring out which scenario actually happened will be a difficult task for the team. Each story should be associated with a unique distribution of sizes and numbers of craters on Ceres, much like a fingerprint. In principle, the team only needs to read the craters of Ceres to determine which prediction matches. However, “the global distribution of craters – and in particular the absence of large craters – is at odds with both scenarios,” says Marchi.

The problems arise because the outer layer of Ceres, a viscous mixture that “looks more like icy dirt than dirty ice,” according to Michael Bland of the US Geological Survey’s Astrogeology Science Center, smooths craters and erases them over time. The problem is especially pronounced with the larger and older craters, which will make reconstructing the history of Ceres a bit difficult.

Of course, it is also possible that the detection of the ammonia itself is faulty. Some researchers, wary of the result, argue that the surface spectra of Ceres are best explained by brucite, a magnesium-based mineral that easily forms in the asteroid belt. “I don’t understand how they concluded so firmly that it was not brucite,” says Rivkin, who disputed earlier claims of ammonia compounds on Ceres.

But it’s too early to say the results are wrong: the full analysis will soon be published in the journal Nature, and the results may stand up to closer examination. “It could be that the Ammonia Silicates took Game 5 to move forward three games to two in a best-of-seven series,” said Rivkin.

Chaos in the formation of terrestrial planets