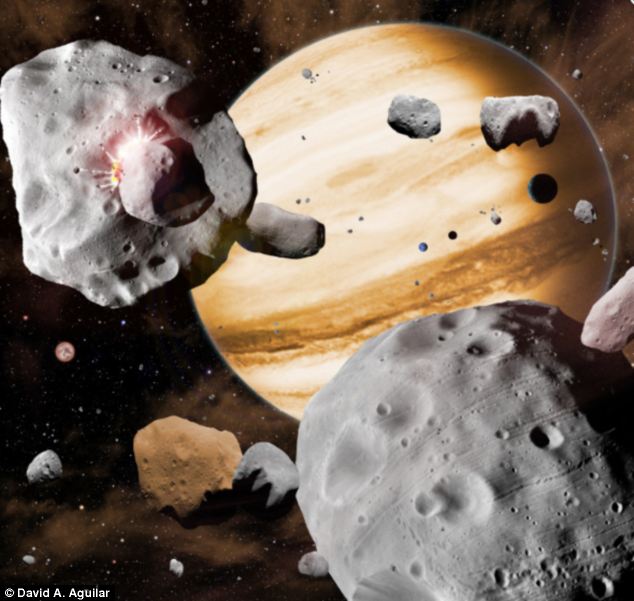 The solar system once looked like a giant chaotic SNOW GLOBE

Our solar system has an unruly past in which giant planets nearly obliterated the asteroid belt and turned it into a cosmic “snow globe.”

That’s according to Massachusetts researchers who say the solar system was once a tumultuous place in which Jupiter might have been as close to the sun as Mars is now.

As the planet moved through the main asteroid belt, they believe it threw interplanetary wreckage away.

In this artist’s conception, Jupiter’s migration through the solar system swept the asteroids out of stable orbits, sending them overlapping. As they migrated, the gas giant planets stirred up the contents of the solar system

The researchers noted that objects as close to the sun as Mercury and as far away as Neptune were all congregating in the asteroid belt at this time.

“The asteroid belt is a melting pot of objects from diverse locations and backgrounds,” said Francesca DeMeo, Hubble Postdoctoral Fellow at the Harvard-Smithsonian Center for Astrophysics.

Astronomers have long recognized the diversity of the asteroid belt, but a new analysis of asteroids inside the belt has revealed that it is more diverse than previously thought. 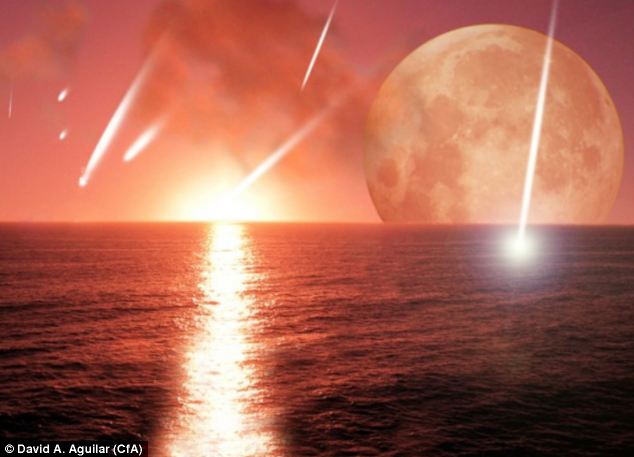 Astronomers have speculated that asteroid impacts from long ago delivered much of the water now filling Earth’s oceans, as seen in this artist’s design. If true, the commotion provided by migrating planets may have been essential in bringing these asteroids 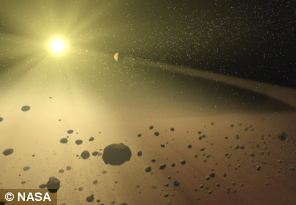 The asteroid belt is a region of space located between the orbits of Mars and Jupiter where most of the asteroids in our solar system are found.

Traditionally, asteroids were seen as the pieces of a failed planet that had been prevented from forming by the influence of Jupiter’s powerful gravity.

The belt asteroids come in different sizes. Some are very small (less than a mile in diameter), while others are quite large.

The largest asteroid is called Ceres. It is about a quarter the size of our moon. It’s a dwarf planet.

Most asteroids in the asteroid belt have an orbital period of around three to six Earth years.

The findings have interesting implications for Earth history.

Astronomers have speculated that long ago, asteroid impacts delivered much of the water that currently fills Earth’s oceans.

If true, the commotion provided by migrating planets may have been essential in bringing these asteroids along.

Traditionally, asteroids were seen as the pieces of a failed planet that had been prevented from forming by the influence of Jupiter’s powerful gravity.

Their compositions seemed to vary methodically from driest to wetter, due to the drop in temperature as one moved away from the sun.

This traditional view changed when astronomers recognized that the current residents of the main asteroid belt were not all there from the start.

Early in the history of our solar system, the giant planets went on a rampage, migrating inwards and outwards substantially.

Using data from the Sloan Digital Sky Survey, Dr. DeMeo and co-author Benoit Carry examined the compositions of thousands of asteroids in the Main Belt.

Their findings raise a number of questions. For example, will another Earth-like exoplanet require a similar pattern of asteroid fallout to make it habitable?

If so, Earth-like planets may be rarer than first thought.