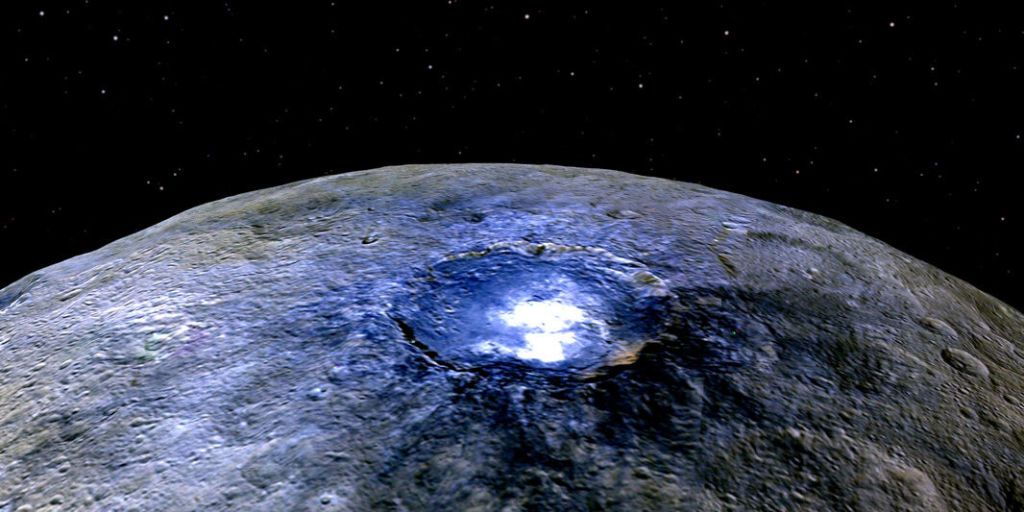 The fall was long and hard for Ceres. Declared a new planet when it was discovered in 1801, it was demoted soon after and became the largest of the space rocks in the asteroid belt, unknown to most people. Until Mission Dawn, and those two bright spots that captured the public imagination.

Today, a new study in Nature says these spots tell us some fascinating things about this dwarf planet, including that there’s more evidence than ever for an ocean beneath the surface. Also, the presence of ammonia on Ceres indicates that it may have started its existence in the icy fringe area known as the Kuiper Belt (where Pluto resides) and migrated towards the sun, all the way to its current location between Mars and Jupiter, due to some unknown cosmic event. All of this builds up a weird picture of a weird, weird world.

The first clue that something strange was going on in Ceres was a series of bright spots amid dark craters and localized atmospheric haze coming from the area. Although initially found right at Occator Crater, the Dawn spacecraft has since shown that these bright spots are all over the world. Later investigations led to the conclusion that it was salt and not ice. And now the origin of this salt is becoming increasingly clear: it is likely to be ice sublimation, where ocean water below the surface freezes, rises to the surface, and is turned into vapor by the sun.

This seems to indicate a liquid ocean somewhere below the surface, and the presence of ammonia keeps the ocean liquid or muddy. Ammonia is not found in abundance in the inner solar system, but is found in the outer solar system on ice giants Uranus and Neptune and on dwarf planets in the Kuiper Belt, such as Pluto. This is why scientists now suspect Ceres to be a transplant from there.

Although Ceres was originally discovered over two centuries ago, demoted from planet to asteroid, then promoted from asteroid to dwarf planet in the Great Pluto Incident in 2006, we still didn’t know much about it. The Dawn spacecraft, launched in 2007, is now in its lowest orbit of Ceres, about 225 miles above the surface. Little by little, the machine completes the image of this strange little world.

Ceres is perhaps one of the most intriguing places in our solar system. And maybe, just maybe, there could be conditions for life.

John Wenz
Writer
John Wenz is a Popular Mechanics writer and space enthusiast based in Philadelphia.

This content is created and maintained by a third party, and uploaded to this page to help users provide their email addresses. You may be able to find more information about this and similar content on piano.io

You could actually make your way through an asteroid belt