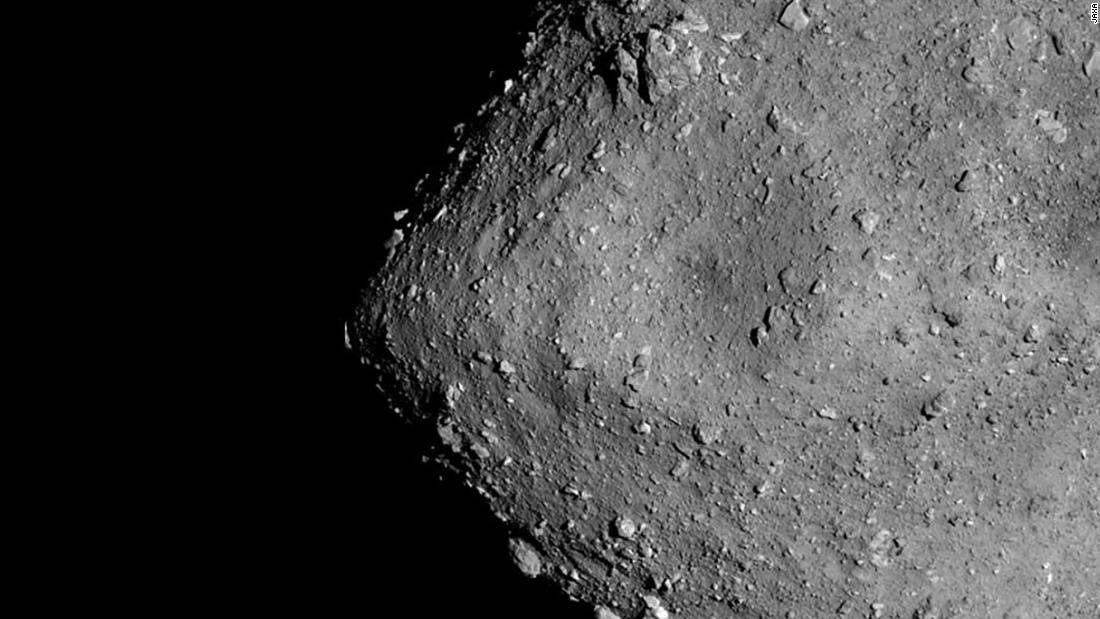 It was the first material to be returned to Earth from a carbon-rich asteroid. These asteroids can reveal how our cosmic corner of the universe formed.

The organic and hydrated minerals locked in these asteroids could also shed light on the origin of the building blocks of life.

Ryugu is a dark, diamond-shaped asteroid that is about 1 kilometer wide. Hayabusa2 collected a sample of the asteroid’s surface on February 22, 2019, then fired a copper “bullet” into the asteroid to create a 33-foot-wide impact crater.

A sample was taken from this crater on July 11, 2019. Then, Hayabusa2 flew over Earth and dropped the sample in Australia last December.

The C-type, or carbonaceous, asteroid is much darker than scientists originally thought, reflecting only about 2% of the light that strikes it, according to a study published Monday in the journal Nature Astronomy.

After opening the sample, scientists were surprised to find that the spacecraft had collected 5.4 grams from the asteroid, far more than the mere gram they expected, said Toru Yada, lead author of the asteroid. study and associate principal investigator at the Institute of Japan Aerospace Exploration Agency Space and Astronautical Sciences.

In the second study, also published Monday in Nature Astronomy, researchers determined that Ryugu is made up of clay and other hydrated minerals, with a number of carbonates and organics inside the sample.

These results are the first to be published on the Ryugu sample.

But Ryugu is darker, more porous, and more brittle than expected compared to carbonaceous chondrites. The density of the samples is also much lower than that of any other meteorite studied. Ryugu’s low density aligns with the idea that the asteroid is a small pile of rubble of fragments held together by gravity.

These samples helped researchers confirm detections made while Hayabusa2 was near Ryugu.

“Some of these material properties are close to those of the carbonaceous chondrites that we have in our collections, while others were clearly distinct, which is quite exciting,” said Cédric Pilorget, lead author of the second study and associate professor. at the University of Paris -Institut d’Astrophysique Spatiale de Saclay in France.

“These samples therefore constitute a particularly valuable collection, which can help to revisit the paradigms of the origin and evolution of our solar system.”

Asteroid samples like Ryugu offer researchers a rare opportunity to directly study the remains of the origin of the solar system and its planets. This is because they were not contaminated by falling into Earth’s atmosphere and landing on its surface, like meteorites.

This pristine view of the origin and evolution of organic matter represents the most primordial material available in terrestrial laboratories to date, the researchers said.

“As a member of the mission team, I felt so happy to manipulate and analyze the first C-type asteroid samples with my hands,” Yada said.

“It was (and still is!) An amazing experience,” Pilorget said via email. “The teamwork and international collaboration are truly exemplary and I am really happy and proud to be part of this great mission.”

Some of the samples have been shared with other research teams and more discoveries on Ryugu are expected soon, Yada said.

Samples from Bennu, an asteroid that may share similarities with Ryugu, are currently en route to Earth after NASA’s OSIRIS-REx mission collected them in October 2020. The samples will return to Earth in September 2023.

“We would like to compare samples from Ryugu with samples from Bennu to see what is similar and what is different between them,” Yada said.

Patrick Michel, research director at the National Center for Scientific Research in Paris, is a researcher for both missions. Although he did not participate in this research, he considers these first results to be historical “because they give the very first results of the preliminary analysis of samples from a carbonaceous asteroid”.

Asteroid samples like these offer a different take on space rocks.

Previous research has suggested that Ryugu and Bennu are fragments of a once much larger celestial body that has been touched by something.

“The possibility that the two bodies have a common origin, or that their parent bodies come from the same region is still valid,” said Michel. “We can check if they have a common history or figure out what is different and why.”

The sky this week from December 17 to 31