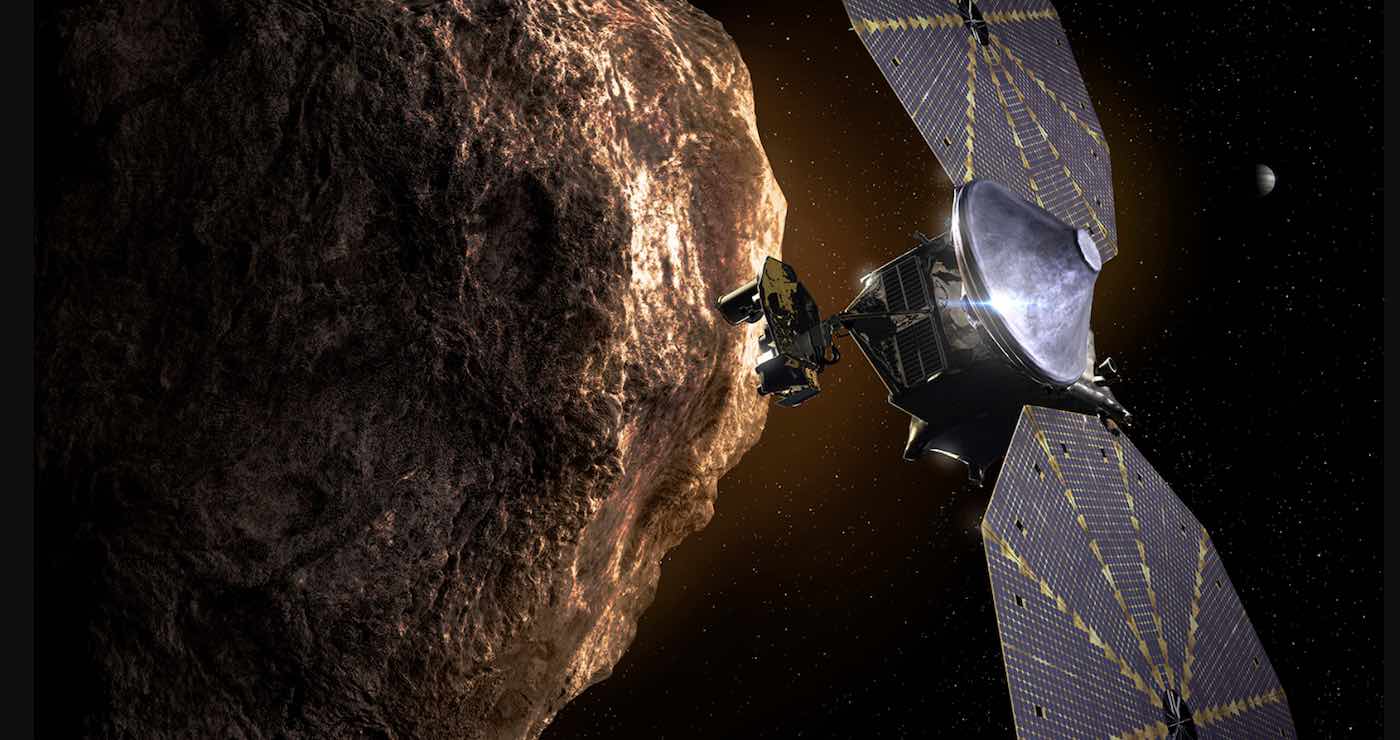 Tomorrow, October 16, NASA will launch the Lucy mission into space – it will set sail for the Trojan asteroids, with the aim of discovering the first stories of our solar system.

Thought to hold the unused remnants of the outer planets, the Trojans sit in two separate clouds called L4 and L5 around the same orbit as Jupiter.

Throughout her twelve-year mission, Lucy will stop at eight different asteroids to study how and what they are made of.

Lifting off from Cape Canaveral, Florida aboard an Atlas V rocket, Lucy takes its name from the fossilized ancestor on Earth that gave us insight into the history of human evolution, which, believe it or not, takes its name from the Beatles song Lucy in the sky with diamonds. (The song was reportedly played aloud and repeatedly in the expedition camp all evening after the dig team’s first day of work to recover Lucy’s fossil.)

This anecdote was made all the more special because Ringo Starr himself sent Lucy’s team a special message of congratulations as launch day approached.

No other space mission in history has been launched to so many different destinations in independent orbits around our sun. Lucy will show us, for the first time, the diversity of primordial bodies that built the planets closest to us.

The journey will proceed, incredibly, without any thrusters on board, using only orbits, some solar-powered propulsion, but mostly through the use of Earth’s own gravity.

There will be two rotations of the Earth which will act like the winding of a slingshot; a necessity to reach the outer solar system. This maneuver will be replicated a third time when the craft returns to Earth en route to the second asteroid cloud as part of its final destination, traveling a total of four billion kilometers over the lifetime of its mission, using two massive wings of solar panels to keep his instruments running.

A Weekend on Trojans

The Jupiter Trojans, also known simply as Trojans, are a group of asteroids believed to represent the raw remains of the formation of the outer planets of Jupiter, Saturn, Uranus, and Neptune, or the shattered remains of planetesimals. that were caught in the orbit of Jupiter as the gas giant entered its final stages of formation, though the latter theory faced major problems.

An interesting feature of what we know of Trojans is that from object to object their surface composition varies enormously, suggesting that they came from different regions of the system and arrived in orbit where they are found today, potentially due to gravitational pull by Jupiter and Saturn as they migrate to their current orbits.

“These objects haven’t really changed much since the time the planets came together,” said Hal Levison, principal investigator of the Lucy team. “As a result, by studying them, we can understand the physical conditions of the early solar system, as well as how the planets grew and how they moved in the beginning.”

Little is known about the minerals or materials contained in about 9,000 asteroids over 2 km in diameter float in the L5 and L4 swarms. The biggest ones are all named after characters from the Trojan Saga, like Hektor, Patroclus, Agamemnon, Achilles and Mentor, who are the five greatest.

Lucy will visit Eurybates and its tiny moon Queta in the L5 Swarm, along with Polymele, Leucus, and Orus (if anyone wonders where they all got those names from, just look at book 2, line 7 of The Iliad) before traversing the solar system to the L4 swarm and visiting Patroclus, which at 60 miles in diameter is the third largest of all Trojans, and its binary object Menoetius.

To study and photograph Trojans, Lucy brings a spectrometer, which generates images of different colors depending on the molecules the photographed object is made up of – a powerful black-and-white camera like the one found on the Hubble Space Telescope, and a thermal imager.

For superspace enthusiasts, early risers, or those in much later time zones, a live broadcast on NASA’s website of Lucy’s launch will start streaming at 5 a.m. EST.

Humanity will have to sit tight until the election cycle after the next kick before the photos of Lucy’s career start to come home, but luckily there will be dozens more missions and discoveries for us take care of by then, including Perseverance and the soon-to-launch James Webb Space Telescope.

(LOOK the video of this story below.)

START this story in those distant newsfeeds now…

Astronomers get a 3D glimpse of nearby stellar nurseries