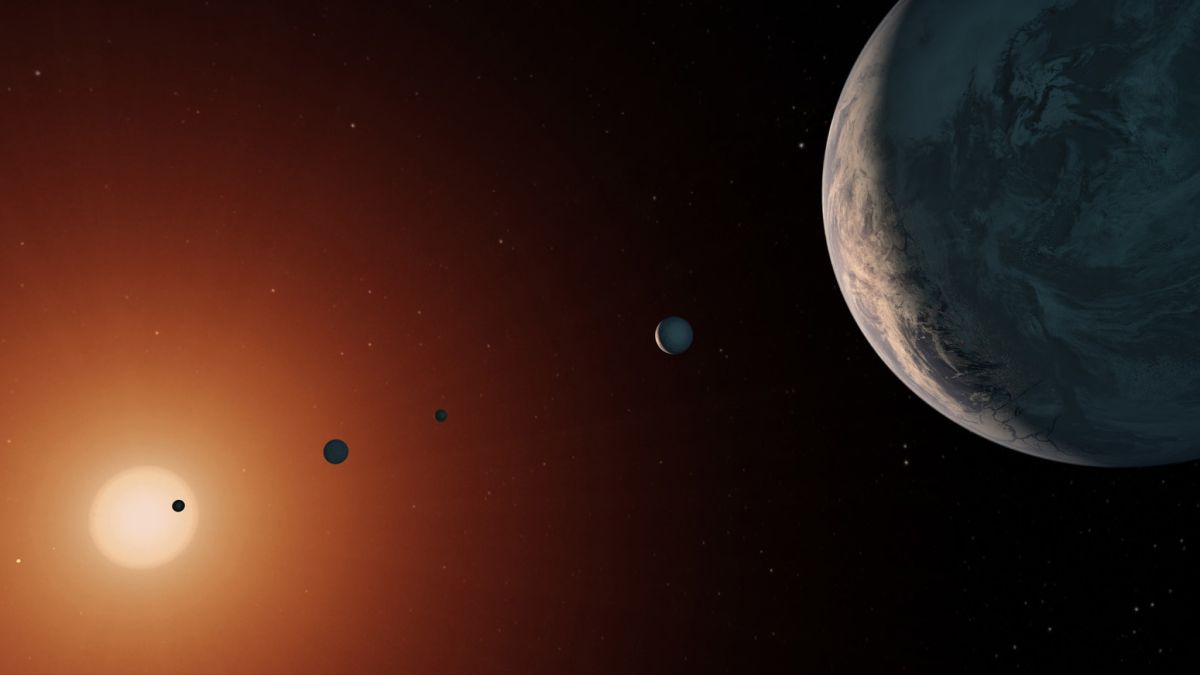 TRAPPIST-1 would be an ordinary star without the scientific interest aroused by its seven planets.

Astronomers first spotted the new worlds, of which at least three could be habitable, in 2016. Now, a new study suggests that how the TRAPPISTE-1 the orbit of the planets could reveal clues to their evolution and how often space rocks crashed against them during their formative years.

Located about 40 light years from the sun in the constellation Aquarius, TRAPPIST-1 is a cold, dark star called a red dwarf, the most common type in our galaxy, the Milky Way.

Around the star, seven exoplanets the size of the Earth, denoted by single letters from TRAPPIST-1 b to h depending on their distance from the star, orbit in a way astronomers call “resonant.” Resonance means that although each planet takes a different time to complete an orbit, the pairs regularly end up at the same starting point.

For example, for every 8 orbits completed by the planet TRAPPIST-1b, which is closest to the star, planet c makes 5 turns, planet d 4 and planet e 2 orbits. And in the new research, scientists argue that this oddly regular orbital dance wouldn’t be possible if these planets were subjected to too much pounding by space rocks after they were born in the protoplanetary disc that surrounded the newly formed star TRAPPIST-1 somehow. 7 billion years. since.

Related: Symphony of exoplanets: listen to the orbital music of the worlds of TRAPPIST-1

“We discovered that after these planets formed, they had not been bombarded by more than a very small amount of things,” said astrophysicist Sean Raymond of the University of Bordeaux in France and the lead author of the study. in a report. “That’s pretty cool. It’s an interesting piece of information when we think about other aspects of the planets in the system.”

The team of American and European researchers simulated the evolution of the TRAPPIST-1 system on a computer. Scientists were trying to find out how many “stuff” could strike these planets before their synchronized orbital dance was disrupted.

â€œWe can’t say exactly how many things hit one of these planets, but because of this special resonance setup, we can put an upper limit on it,â€ Raymond said. â€œWe can say, ‘It can’t have been more than that. “And it turns out that this upper limit is actually quite small.”

The model suggests that the planets in the TRAPPIST-1 system must have formed very early and very quickly, in about a tenth of the time it took our Earth train, the scientists said in the statement.

By the time the protoplanetary disc around TRAPPIST-1 disappeared, these planets were already in orbit near their mother star. Scientists believe that protoplanetary disks, filled with gas and dust, only exist a few million years after a new star was formed. Computer models suggest that it is the gravitational force of this disc that propels the planets into orbital resonance, the researchers said. The impact of a large body, similar to the one that crossed young Earth about 4.5 billion years ago in a collision that formed the moon, would certainly have disrupted this synchronized orbital dance.

Scientists hope that understanding the intensity of bombardment by space rocks in the early stages of a planet’s life can help them understand the chemical makeup of the planet. In the case of Earth, many chemical elements – including life-giving water – would have been introduced by impacting comets, asteroids and meteorites. On its own, the collision that created the moon would have delivered most of the planet’s current carbon and nitrogen, two essential preconditions for life to exist.

Currently, scientists know very little about the chemical makeup of the worlds of TRAPPIST-1. Understanding the amount of space rocks that crashed there could improve these estimates.

“Today we have constraints on the makeup of these planets, such as how much water they can hold,” said Andre Izidoro, an astrophysicist at Rice University in Houston and co-author of the article, in the press release. “But we have really big error bars.”

But these planets may have already formed from matter with more hydrogen in them and naturally have more water than Earth, even without all of those comets and space rocks coming in.

â€œFor example, if one of these planets has a lot of water, say 20% mass fraction, the water must have been incorporated into the planets early, during the gas phase,â€ said Izidoro. “So you will have to understand what kind of process could bring this water to this planet.”

Currently, scientists have limited tools to go much further. But new observatories like the James Webb Space Telescope, scheduled for commissioning in 2022 and the most powerful space telescope ever built, and the completion in 2024 of the Extremely large telescope at the European Southern Observatory, can put together the different pieces of the puzzle.

â€œFor the TRAPPIST-1 system, we have these land mass planets that formed early,â€ said Rajdeep Dasgupta, a planetologist at Rice University and another co-author of the article. â€œSo a potential difference, compared to how the Earth was formed, is that they might have some hydrogen atmosphere from the start and never experienced a late giant impact. And that could change a lot. of evolution in terms of the interior of the planet, outgassing, volatile loss and other things that have implications for habitability. “

By the end of this puzzle, scientists will hopefully know if there could be life in any of these Outlands.

The research is described in a paper published Thursday, November 25 in the journal Nature Astronomy.

India shines at the International Astronomical and Astrophysical Olympics, winning 4 gold and 1 silver