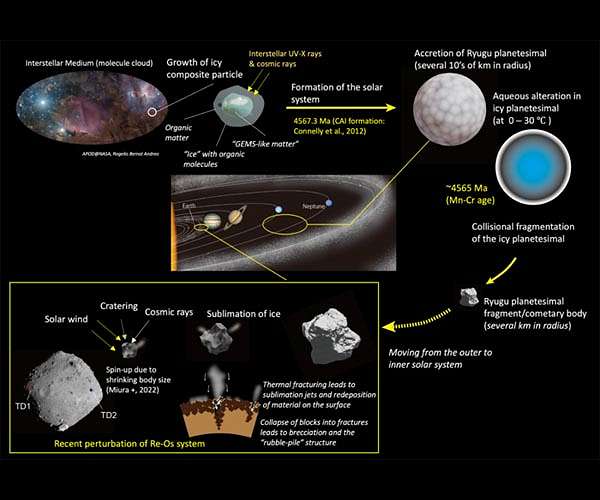 What happened before, during and after the formation of the solar system

Asteroids and comets represent the material that remained after the formation of planets orbiting the Sun. Such bodies would have originally formed in a vast disk of gas and dust (protosolar nebula) around what would become the Sun (protosole) and thus may hold clues to the processes that operated during that time in the solar system. The protosolar nebula would have rotated the fastest towards its center and this would have concentrated much of the material in this region. Some of the material then began to fall onto the surface of the protosole, raising its temperature.

The higher temperature of the protosole would have led to an increase in radiation output, which could have caused photoevaporation (evaporation due to light energy) of the material in the inner solar system. Later, as the inner solar system cooled, new materials condensed with distinct compositions from what had been present before. Eventually, these materials would stick together to produce large bodies (planetsimals) which would then collide apart, some forming S-type asteroids. An S-type asteroid (Itokawa) was the target of the Hayabusa mission, the predecessor to Hayabusa2. The samples that have been sent back to Earth have revealed a lot about these asteroids, including how their surfaces are affected by continuous small impacts and confirming identifications made by telescopes on Earth.

Haybusa2 targeted a very different type of asteroid, the C-type, which, unlike the S-types, preserves much more of the primitive material from the outer solar system, which was much less affected by protosole heating. Initial ground-based telescope and Hayabusa2 spacecraft remote sensing information suggested that Ryugu may contain organic matter and small amounts of water (adhered to the surface of minerals or contained within their structure).

However, C-type asteroids are incredibly difficult to study using these methods because they are very dim and the resulting data contains very little information that can be used to identify specific materials. As such, the sample return represented a very important step in improving our understanding of C-type asteroids. Approximately 5.4g of sample was returned to Earth in December 2020 and the samples were originally studied at the Japan Aerospace Exploration Agency (JAXA) Phase 1 Conservation Facility in Sagamihara, Japan. Full geochemical analysis began in June 2021 once the samples arrived at the Pheasant Memorial Laboratory (PML) Phase 2 Preservation Facility, Institute for Planetary Materials, Okayama University, Japan.

Initially, the external and physical information of the samples was obtained, but soon after the particles were opened using a microtome equipped with a diamond knife. Inside, the particles revealed textures indicative of a freeze-thaw and a fine-grained mass of different minerals, with some coarser-grained components scattered throughout. The majority of the minerals were hydrous silicates called phyllosilicates (clay), which formed through chemical reactions involving non-hydrated silicate minerals and liquid water (aqueous weathering). With the freeze-thaw textures, the evidence indicated that the samples had experienced both liquid water and frozen water in the past.

Aqueous weathering was found to have peaked before ~2.6 Myr after the solar system formed, through analysis of manganese and chromium in magnetite (iron oxide) and dolomite (calcium carbonate) minerals -magnesium). This means that the Ryugu materials experienced liquid water very early in the history of the solar system and that the heat that melted the ice would have been provided by radioactive elements that only survive for a relatively long period of time. short (almost all would have disappeared after 5 Myr). After the disintegration of a large part of the radioactive elements, the body cooled and froze again.

Ryugu also contains chromium, calcium, and oxygen isotopes that indicate it has preserved the most primitive source of material from the Protosolar Nebula. Additionally, organic materials from Ryugu record early isotopic signatures suggesting their formation in the interstellar medium (the region of space between solar systems) or the outer protosolar nebula. With the abundant water and the absence of any inner solar system material or signatures, the findings above suggest that the material inside Ryugu was bonded (accreted) and aqueously weathered very early in the system. external solar.

However, to form liquid water from the heating of a rocky and frozen body by radioactive decay, the body must be at least several tens of kilometers long. As a result, Ryugu was originally meant to be part of a much larger body, called a planetesimal. Icy planetesimals are believed to be the origin of comets, which can be formed by their collisional breakup. If Ryugu’s precursor planetesimal were impacted after it refreezes, then a comet preserving many of the planetesimal’s original textures and physical and chemical properties could be produced. As a comet, the fragment should have moved from the outside to the inside of the solar system by a dynamical route, involving the interactions of the planets.

Once in the inner solar system, Ryugu would then have undergone significant sublimation (transition from solid ice to gas). Modeling in a previous study indicated that sublimation could increase the speed at which Ryugu spins and lead to his distinctive spinning top shape. Sublimation could also have led to the formation of jets of water vapor (as seen on Comet 67P) which would have redeposited subterranean material on the surface and frozen it in place.

Additionally, the jets may explain some interesting differences between the sample sites where the Ryugu samples were obtained. The Hayabusa2 mission sampled material from the surface of Touchsite 1 (TD1) itself and most likely subsurface material from an artificial impact crater from Touchsite 2 (TD2). Some of the TD1 samples show elemental fractionation beyond the millimeter scale and scattered abundances of B and Be.

However, all TD2 samples record elemental abundances similar to CI chondrites (a type of meteorite with elemental abundances similar to the Sun) and show no evidence of elemental fractionation at the millimeter scale. One explanation is that the TD1 site records jet-entrained material brought to the surface of the comet-like fragment from many distinct subsurface regions and thus represents a wide variety of compositions. Meanwhile, TD2 samples may represent material from part of Ryugu and as such have a more uniform composition.

After complete sublimation of the ice on the surface of Ryugu, a rocky, low-density, highly porous asteroid formed. As water-related processes ceased, space weathering began. Ryugu’s surface has been bombarded over time by large amounts of energetic particles from the solar wind and cosmic rays from the sun and distant stars.

The particles altered the materials on the surface of Ryugu, causing the organic matter to change in terms of structure. The effects of such a process were more evident in TD1 particles from the surface of Ryugu compared to those from TD2, which had likely been brought to the surface during the creation of an artificial impact crater. As such, space weathering is a process that still shapes the surface of asteroids today and will continue to do so in the future.

Despite the effects of spatial weathering, which act to alter and destroy the information contained in organic matter, primitive organic materials have also been detected by the comprehensive geochemical analysis of the Ryugu samples. Amino acids, such as those found in the proteins of every living organism on Earth, have been detected in a Ryugu particle. The discovery of protein-forming amino acids is significant, as Ryugu has not been exposed to Earth’s biosphere, such as meteorites, and as such their detection proves that at least some of the building blocks of life on Earth could have formed in space environments.

Hypotheses regarding the origin of life, such as those involving hydrothermal activity, require amino acid sources, with meteorites and asteroids like Ryugu representing strong candidates due to their amino acid inventory and because such material would have been easily deposited on the Earth’s surface. Primitive land. Moreover, the isotopic characteristics of the Ryugu samples suggest that Ryugu-like materials could have provided the Earth with its water, another essential resource for the origin and maintenance of life on Earth.

Taken together, the findings reported by the study provide invaluable insight into the processes that affected the most primitive asteroid sampled by mankind. Such ideas have already begun to change our understanding of events that occurred before the solar system and up to the present day. Future work on the Ryugu samples will undoubtedly continue to advance our knowledge of the solar system and beyond.

Research report:On the origin and evolution of the asteroid Ryugu: a comprehensive geochemical perspective 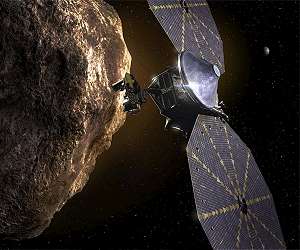 NASA’s Lucy mission team is in the midst of a multi-stage effort to further deploy the spacecraft’s unlocked solar array. On May 9, the team commanded the spacecraft to run the array deployment motor by simultaneously using the main and backup motor windings to generate more torque, i.e. stronger pull. The motor worked as expected, winding further into the cord that opens the solar panel. After running the engine for a series of short intervals to prevent overheating, the team pa…read more

“Only One Earth”: NEPA urges J’cans to help protect the planet