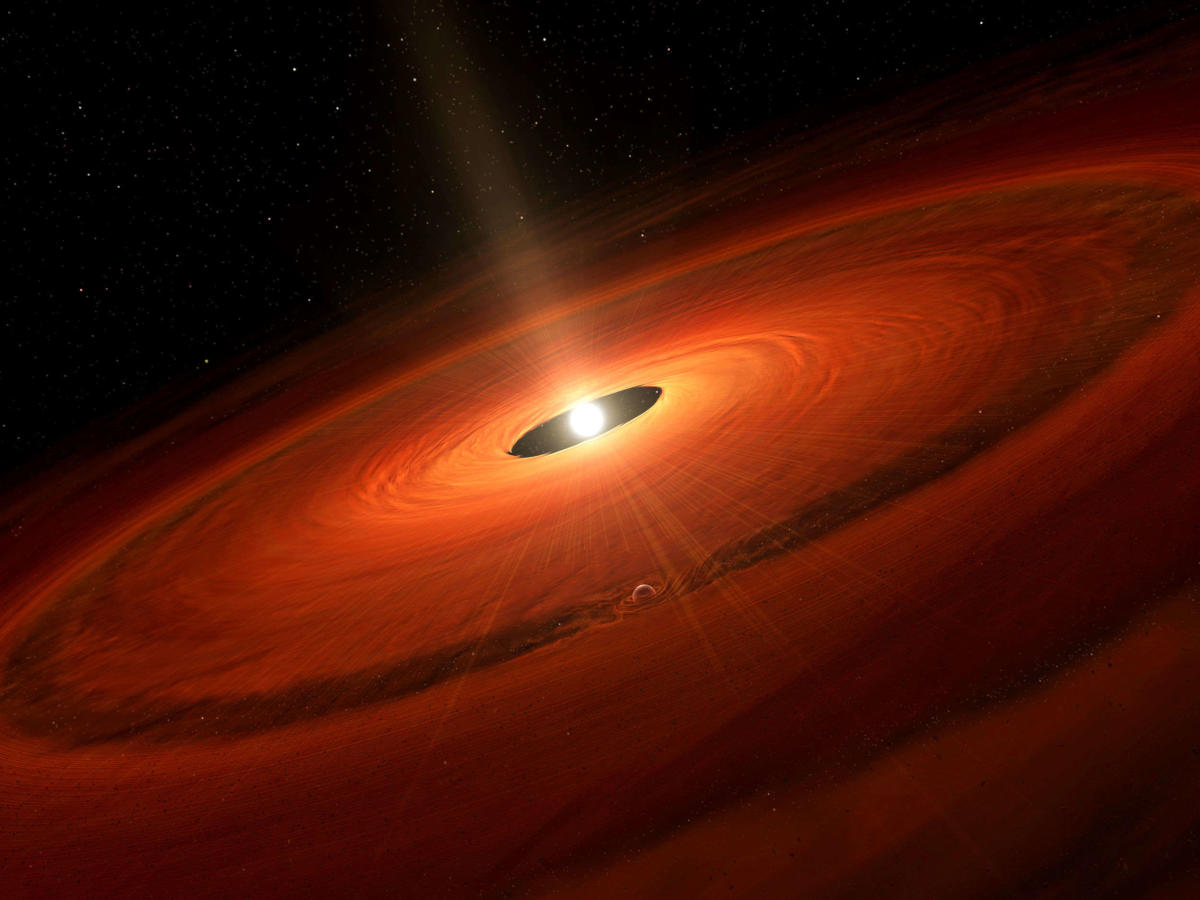 We know that the solar system formed from a collapsing cloud of cold gas and dust, called the protosolar molecular cloud, which was probably part of a much larger nebula. This has been a working assumption for a long time, but over the past few decades we actually saw many clouds collapsing into nearby nebulae.

We still have many questions about the process, but two big questions persist: what triggered our collapse and how long did it take?

The popular idea in the media is that a nearby massive star exploded and the wave of matter hitting our protosolar cloud compressed it enough for its own gravity to take over, collapsing it. But there are other ways it could have happened. There is a type of massive star of terrifying brightness called a Wolf-Rayet star, and these blow a strong and extremely fast gas wind outward. Such a wind could also have triggered the collapse. Even a lower mass star in his death asymptotic red giant phase could blow a wind strong enough to accomplish the deed.

How can we tell them apart? Meteorites.

A slice of NWS 10256, a meteorite that fell in Morocco in 2015, contains irregular white inclusions rich in calcium and aluminum, among the very first materials to fuse together in the solar system. Photo: Phil Plait (personal collection)

Good, some meteorites, especially those that have what are called inclusions rich in calcium and aluminum, or CAI, in them. They are small nodules of minerals, usually a few millimeters in diameter, which contain unusually high amounts of these two elements. Given their characteristics, they are among the earliest minerals to form in the solar system, coming together around the same time the cloud itself collapsed. These are forming so rapidly in fact that scientists consider the time they formed to be the same as the time the solar system itself formed.

The key here is that these elements were delivered by any type of event that collapsed our protosolar cloud. The CAIs in meteorites are time capsules that show us what triggered our very genesis.

It is important to note that their age can be found using radioactive dating, for example by looking at the uranium/lead ratio. This type of dating obtains an age of 4.567 billion years, which then corresponds to the age of the solar system itself.

But it’s better. There are radioactive isotopes of calcium and aluminum, called calcium-41 (or Ca-41) and aluminum-26 (Al-26), which have half-lives of around 100,000 and 750,000 years. Ca-41 decays into potassium and aluminum decays into magnesium. We know that CAIs contained these two isotopes when they formed, but they decayed long ago into their daughter elements.

Yet the abundance of these daughter elements tells us How many parent isotopes were in the CAIs in the first place. And, since the two isotopes decay at different rates, the ratio of the amounts of Ca-41 and Al-26 changed over time.

Expanding debris from the Kepler supernova of 1604, a Type Ia explosion of a white dwarf in the Milky Way galaxy. Credit: Radiography: NASA/CXC/SAO/D.Patnaude, Optics: DSS

This is the key to it all. These two isotopes are created in supernovae, Wolf-Rayet stars and asymptotic red giants, but in different amounts. If we assume that these stars injected both isotopes into our protosolar cloud and this also triggered its collapse, then by measuring their ratios we can not only determine what kind of event caused the formation of our solar system, but also determine the duration of this process. took.

Needless to say, it’s complicated — obviously; just explaining it is complicated and it doesn’t include complex math and physics. But a team of scientists examined CAI samples from various meteorites, including the famous Allende meteoriteand examined the ratios of radioactive aluminum and calcium to determine how long it took after injecting these elements into the cloud for the CAIs to condense [link to paper].

These numbers are different for different trigger events. They found that if a supernova made these elements and seeded our cloud with them, it would take about 1.5 million years for the cloud to collapse. However, this number is incompatible with the abundance of other elements like iron-60 that a supernova would also throw into our cloud. That’s not to say a supernova didn’t, but it does make it less likely.

I will note that what triggered the collapse was the last event to seed our cloud; there have certainly been prior things like supernova explosions that have charged us with iron and other elements. They simply did not affect the cloud enough to start the process of forming the solar system.

And all of this also tells us that the solar system’s progenitor cloud collapsed quite quickly, somewhere between 600,000 and 1.1 million years ago. We went from a nebula to a real solar system in less time than it took for evolution to mutate Australopithecus in Homo sapiens. It’s impressive.

One thing I love about studies like this is that it contrasts us with what we see in the Universe at large. We are part of the cosmos, both in that we exist in it and in that we are made of materials that come from it. We know that stars form in other clouds; we see it happening, and we see it in all the different stages. Studies like this allow us to plug into this timeline, place ourselves among the stars, and see our place with them.