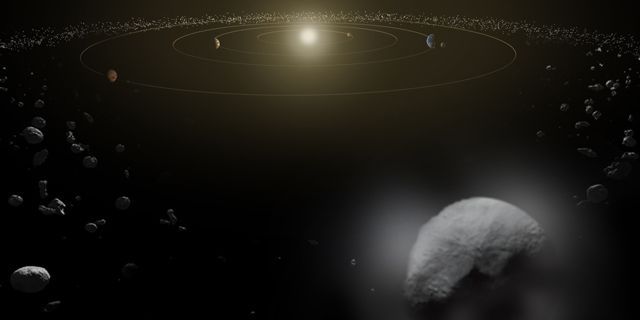 Last week, scientists announced in a study in Nature that Ceres, a dwarf planet in the asteroid belt, spews water vapor into space. In fact, this big ball of rock and ice could hold more water than Earth.

It is a fascinating discovery. Astronomers have known Ceres since 1801 (when it was declared a planet, a classification that was retracted half a century later) without knowing that it contained so much water. And the discovery comes at a crucial time for exploration of Ceres’ home, the asteroid belt.

Over the next 2 years, NASA’s Dawn mission, which has visited large asteroids like Vesta before, will arrive at Ceres to map the surface of the dwarf planet. And the ESA (European Space Agency) Rosetta mission, which has just come out of hibernation, will track a comet as it approaches the Sun. Although the two missions have different goals, both have the potential to tell us more about the origin of all the water in our solar system.

Prior to last week’s announcement, water vapor had not been conclusively found in the asteroid belt, although scientists have been searching for it for a long time. The problem was that previous instruments were simply not sophisticated enough to pick up the faint signal from this area of ​​space.

the Herschel Space Observatory, which was used to make the discovery, was a large infrared telescope with three spectrometers that allowed it to study the origins of the universe as well as the composition of distant planets. Herschel was launched in 2009 but shut down in 2013 when it ran out of helium, which kept science instruments running. But before the observatory was destroyed, ESA’s Michael Küppers, the lead author of this new study, and his colleagues focused Herschel on Ceres. The first time they looked, they saw no sign of water vapor; after a few more tries, they saw the signal they were looking for.

When it comes to planetary science, “things are moving fast, and one of the reasons is that telescopes have gotten really good,” says Carol Raymond, deputy principal investigator for the Dawn mission.

Herschel does not “see” the water coming from Ceres; he measures it in a more roundabout way. Light passing through different molecules affects light in distinct ways, and these can be measured. Scientists have discovered which frequencies of light correspond to which molecules, such as water, allowing them to determine what the atmospheres of distant planets are made of. In this case, the team detected a small dip in the area of ​​the light spectrum that corresponds to water vapor, indicating that it was there.

A witness to history

Although there are fine artists’ impressions of Ceres encased in a cloud of water vapour, the actual amount coming from the dwarf planet is much smaller than might be photographed. Küppers’ teams measured water vapor coming from Ceres at a rate of about 13.2 pounds per second. “It’s a very low level of activity compared to comets, which have a lot more outgassing,” says Seungwon Lee, a NASA scientist who helped with the water vapor models at Ceres. “It gives a whole new view of the formation of the solar system.”

The discovery of water vapor on Ceres means planetary scientists have another destination for possible astrobiology-based missions to search for new life. “This clearly puts Ceres in the same category as Europa and Enceladus as lifetime candidates,” says Raymond.

The discovery could also answer some of the big questions in planetary science, like how our solar system formed and why the Earth has water. “Ceres and Vesta [Dawn’s other mission target] It turns out they got lucky and got left behind,” says Raymond. “They are witnesses to the history of the solar system.

At the time of Jupiter’s formation, about 4.5 billion years ago, the solar system was in a state of total upheaval. Objects like Ceres moved back and forth between the inner and outer solar system, crashing into planets and each other, making this a particularly destructive time of growing pains. Some scientists believe that during this time, large icy bodies hitting the Earth could have supplied water to our planet and made it what it is today.

“Why does Earth have all this water? Was it just in the Goldilocks zone, or was it all from the outer solar system? That’s a burning question in planetary science,” Raymond says.

The Dawn spacecraft is expected to arrive at Ceres in March 2015. It will be able to map the surface of the dwarf planet and take a closer look to check for evidence of cryovolcanism or ice volcanoes. Since the spacecraft will approach at a time when Ceres is far from the sun, it is unlikely to be able to photograph any water vapor rising from the surface. But Dawn’s team will have a better idea of ​​what the areas where the water vapor has been detected look like.

How does Ceres still have so much water? For one thing, Raymond says, it’s unusual in that the dwarf planet is hovering just on the edge of what planetologists call the snow line. “It’s basically the point where the solar heating has decreased to the point where the water is stable,” says Raymond. Because Ceres is located beyond the snow line, it would not have lost as much water in space as Earth, and it was able to keep all the ice it acquired floating in this part of the solar system.

Like Earth, Ceres is (mostly) round. And scientists believe that, just like our home planet, it has both a core and a convective mantle. But the anatomy of Ceres is very different from that of Earth. Early in the formation of the Earth, some of the rocky and heavy materials that make up our planet melted. The heaviest pieces, such as iron, were therefore free to sink to the center of the rapidly accumulating planet. Today we have a strong iron core and a convective mantle of molten rock, with a thin solid rocky crust. Because the much smaller Ceres likely never experienced early Earth melting, it would never have had the chance to develop the same kind of dramatic differentiation in its rocks.

Scientists believe the rocky parts of Ceres eventually sank towards the center of the dwarf planet and left behind a large icy mantle, covered on the surface with any rock remnants migrated up from the core or deposited by the passage of asteroids.

Lee works on the Rosetta mission to study comet 67P/Churyumov-Gerasimenko. The Rosetta space probe, launched in 2004, will finally have an appointment in August with the comet that it has been pursuing for 10 years. It will track the ice ball for more than a year, taking measurements of the comet and even sending a lander toward its core.

Rosetta and Dawn are likely to provide more insight into the origins of our solar system and the role of ice (in the form of water or otherwise) in planetary bodies. Combined with the happy coincidence of Herschel’s discovery, this looks like an exciting time for planetary science.

“Even when [Dawn] was funded, we didn’t know half of that Ceres stuff,” Raymond says. “We knew it was round, but now it’s coming into focus, and we’re going to be there.”

This content is created and maintained by a third party, and uploaded to this page to help users provide their email addresses. You may be able to find more information about this and similar content on piano.io